Amritsar, Punjab: The Damdami Taksal, headed by Baba Harnam Singh Dhumma has backed the Dal Khalsa march for ‘Rights and Justice’ scheduled to start on Nov 2 from Akal Takht Sahib to Delhi based headquarters of the United Nations seeking world body intervention for bringing the perpetrators of Nov 1984 massacre to book.

This year is commemoration of 30 years of Nov 1984 pogrom. During these agonizing years, the actual victims, their relatives and friends, the community and its concerned leadership has done whatever has been possible to get justice but to no avail, said Baba Harnam Singh head of Damdami Taksal while talking with select media persons at Darbar Sahib today. He urged the international community to come forward and try the accused Indian leadership for master-minding the killing and mayhem against absolutely innocent Sikhs. 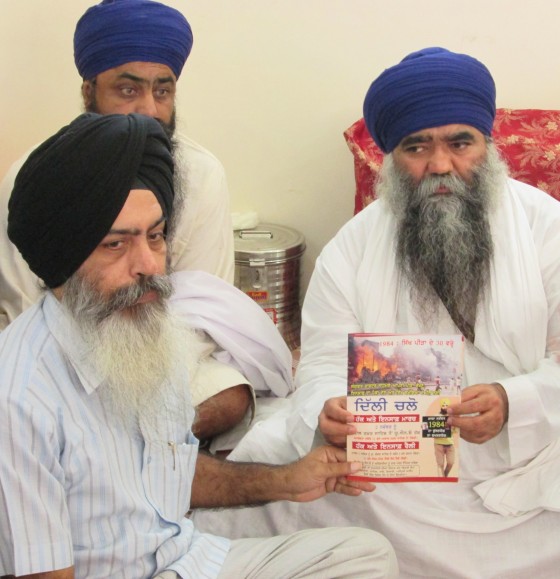 Baba Harnam Singh along with Dal Khalsa leaders released the Poster and 4 page pamphlet of the programme urging the people of Punjab to proceed to Delhi on Nov 2. The activists distributed the posters and pamphlets to Sangat in hundreds. Leaders of both the groups asserted that it’s time to reinforce that Sikhs and friends of Sikhs will continue to remember those who played Tandav (Death Dance) with impunity.

Sikhs were hounded and killed in Delhi. So, we propose to go to Delhi, said Kanwarpal Singh, the spokesperson of the group, which is organizing the march with the support of various panthic groups.

Seeking UN intervention for a political resolution of the Punjab crisis besides punishing the perpetrators of Nov 84, he said Nov genocide was sponsored and patronized by country’s political establishment hence it would be preposterous to hope that the Indian state would ever punish the perpetrators.

Sikhs are not alone who are at the receiving end. We have invited the Kashmiris, the Nagas, the Tamils, the ethnic minorities including Christians, who have suffered politics of genocide at different point of time to join hands in solidarity against the common adversary. Our pain and agony is same so we would share the Dias in Delhi, said he.

He informed the media that the March would start from Akal Takht on Nov 2 and would reach at Delhi the same night. He further said the march would proceed from Bangla Sahib Gurdwara to Jantar Mantar on 3rd morning, where Rights and Justice Rally would be held. He said a select number of representatives participating in the rally would go to UN headquarters to submit the joint memorandum.