Ludhiana: Deadlock on the issue of Sikh political prisoners continues as the main leaders of Bandi Singhs Rihai Sangharsh Committee remain behind the bars and Bapu Surat Singh is kept under intensive care at ICU ward of DMC hospital.

Bibi Sarvinder Kaur, daughter of Bapu Surat Singh Khalsa, told Sikh Siyasat News over phone that the health condition of her father has not improved much and he is still not taking water orally.

Bapu Surat Singh’s son Bhai Ravinder Jeet Singh Gogi said that the doctors have injected glucose in Bapu Surat Singh’s body and his condition had not deteriorated further. “But on the other hand there was not much improvement in Bapu Ji’s condition”, Gogi told SSN. 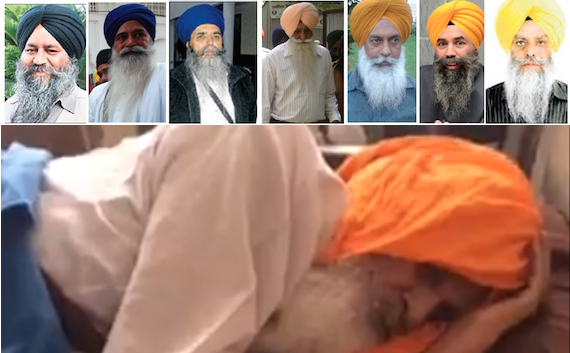 On being asked about future course of their struggle in wake of yesterday’s Supreme Court interim order, Bibi Sarvinder Kaur said that they were not able to deliberate on this issue as all main leaders of Sangharsh committee are still behind the bars.

“Sangharsh committee members are jailed by the government so we were not able to discuss the issue with them” she told SSN.

She said that there was no discussion on this issue with the government authorities also. “No one from the side of government has approached us to discuss the issue, therefore there was no development in this regard”, she said.

It is notable that the Supreme Court of India yesterday restored constitutional powers of state governments to grant premature release to life term convict. But the Supreme court is said to have placed some restrictions and state governments are still barred from taking decision where the life term was granted under TADA or the case was investigated by CBI.

Advocate Jaspal Singh Manjhpur who maintains the list of Sikh political prisoners said that he was waiting for a copy of Supreme Court order. “I have come to know about yesterday’s order through various news reports but I am still waiting for copy of Supreme Court order as it is not yet available on website of SCI. I will me able to make specific comments only after reading the order”, Advo. Manjhpur told Sikh Siyasat News.

He, however, said that there was no restriction on the Central government to release a life term convict even if he was sentenced under TADA or the case was investigated by the CBI.