According to data obtained from Housing Justice more than 5% of those experiencing homelessness in London that died outdoors in the last 12 months were men of Sikh background. The Salvation Army suggests the number of deaths of Sikhs may be even higher.

Housing Justice has determined 9 of the 170 or 5.3% classified as homeless that died in London in the last 12 months have been identified as men of Sikh origin as they all have Singh in their name. All Sikh men should use Singh meaning Lion after their first name.

The figure for the proportion of Sikh deaths could to be even higher as suggested by the Salvation Army as some Sikhs do not always use Singh after their first name and could just be using a surname.

The Office for National Statistics (ONS) based on responses to the optional religious question in the Census 2011 estimate the Sikh population in London is around 1.3%. 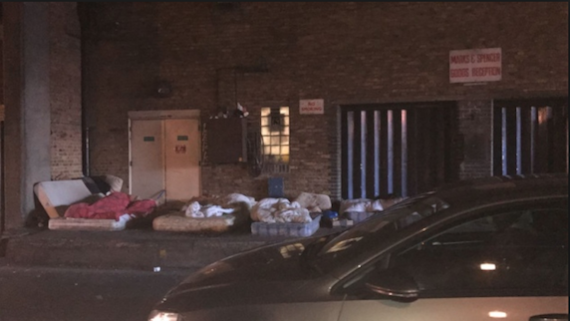 The Sikh community that is regarded as one of the most affluent in the country with the highest levels of home ownership are perplexed and embarrassed why the number of Sikh deaths of homeless people in London is at least four times higher than would be expected.

The 250 Sikh Gurdwaras throughout the UK have developed an excellent reputation for their free food kitchens (langar) that are open to all and were started by Guru Nanak Dev Ji, the first Sikh Guru. It is Guru Nanak Dev Ji’s Gurpurb (Birthday) next week.

Several Sikh charities have also been established to feed the homeless, but this data on deaths of Sikhs in London who are homeless should be a wake-up call to public bodies and the community itself.

Politicians across the globe rightly always try and talk about ‘langar’ when referring to the positives of the Sikh community. Whenever senior politicians visit Gurdwaras in the UK or Sri Harmandir Sahib in Amritsar (often referred to as the Golden Temple) they want to be pictured cooking or serving in our free food kitchens. However, many of them bury their heads in the sand when it comes to difficult issues raised by the Sikh community.

There are a record number of people sleeping rough in London, with charities reporting a spike in street homelessness. Figures show that 3,103 people were found sleeping rough in the capital between July and September 2018 – the first time the total has exceeded 3,000 in a three-month period. The data, from the Combined Homelessness and Information Network (CHAIN), shows the number of rough sleepers has risen by 20% on the previous three months, and by 17% compared with the same period last year.

According to a study released last month, 449 people experiencing homelessness died outdoors, or in temporary accommodation in the UK in the past year since October 2017. The figures, compiled by the Bureau of Investigative Journalism (BIJ) as part of their long-term project, Dying Homeless, show that least one homeless person dies each day.

The inquiry found 69% of deaths were men, 21% were women and no gender was recorded for the remaining 10%. 14 died in one week and January was the deadliest month, when at least 33 people died.

Charities have called the deaths a national disgrace and blamed soaring homelessness on austerity, expensive private rents and a lack of social housing. They said local authorities should investigate every death. The figures are likely to be a substantial underestimate as no official organisation counts the deaths of homeless people in Britain.

When it boils down to the Sikh community the Ministry for Housing, Communities and Local Government (MHCLG), local authorities and the Sikh community itself would probably point to Sikhs having the highest levels of home ownership compared to other groups.

In 2016 the Sikh Network conducted the UK Sikh Survey that had responses from 4,500 Sikhs. This almost certainly included no Sikhs that were homeless as by definition they are a much more difficult group to reach. 92% of those responding to the survey stated they were living in owner occupier property suggesting the upward trend of Sikh home ownership had continued to rise since 2011.

The figures for the number of Sikhs that have died in London that have been classified as homeless has highlighted the need for decision makers and the community to have accurate data and the higher proportion of Sikh deaths remains unexplained.

“It is a damning indictment of the way ONS force data to be collected by public bodies that MHCLG and all local authorities in the country are unable to provide any data on the extent to which homelessness is an issue in the Sikh community.”

“Earlier this week one of our members met Heather Wheeler the Minister for Housing to raise the need for there to be a Sikh ethnic tick box in the Census 2021 so public bodies start to collect information relating to Sikhs so decision makers and the community are able to address such concerns.”

“Next week we will be meeting and challenging Lord Bourne about the total lack of reliable data on Sikhs in all areas of public policy as he as the Minister responsible at MHLG has refused to openly back the need for a Sikh ethnic tick box in the Census 2021.”

“Although the number of Sikh deaths of homeless people in London is small no one can explain the massive and disproportionate variation. It also suggests the ONS Census data on the Sikh population in different parts of the UK that is derived from the optional religious question is an underestimation and incomplete.”

“Sikhs who are homeless are dying on the streets of London at a disproportionate level yet MHCLG that has the policy lead on housing, community issues and local government admit no public bodies hold any data on homelessness within the Sikh community and MHCLG are refusing to make sure the system going forward is changed so this can be addressed.”

Sikhs have been campaigning for at least two decades for the ONS to include an ethnic Sikh tick box in the census so public bodies are required to collect data on Sikhs so accurate information is available for decision making.

ONS is also not sharing the results from what is terms the “names exercise” looking at Sikh names in the Census 2011. This research was started over a year ago and was suggested by the Sikh Federation (UK) after historic information was provided relating to Leicester and Gravesend that indicated ONS were underestimating the Sikh population by around 30-40% by simply relying on the optional religious question.

“A year earlier the ONS agreed to provide the results from the research we suggested. However, Iain Bell, the Deputy National Statistician who is leading on the Census 2021 wrote to us last month suggesting the work had not been completed.”

“Subsequently we established from the minutes of the Board of the UK Statistics Authority on 28 June 2018 released last month that he told the Board all research relating to ethnicity had been completed when they considered the draft Census 2021 White Paper 2018.”

“The ONS is in the process of being challenged by politicians, including Ministers and shadow Ministers for withholding information from the community. MPs representing Sikh constituents have also made clear they have not been impressed with the transparency of the ONS and information they provided on “public acceptability” showing unanimous support from Sikh religious institutions may not have been considered by the Board of the UK Statistics Authority.”

The Sikh community are preparing to take the ONS and the UK Statistics Authority to court arguing the community is being discriminated against if the Census White Paper 2018 that is expected to be released by the Cabinet Office in the next few weeks fails to include a Sikh ethnic tick box option. In 2011 the main argument ONS used to deny Sikhs an ethnic tick box was a lack of space on the paper questionnaire. This is much less of an issue and not been mentioned by the ONS with the majority expected to complete the census online in 2021.