Washington D.C.: A federal lawsuit was filed earlier today against the United States Department of Defense on behalf of Captain Simratpal Singh, a decorated Sikh American soldier who was ordered to submit to non-standard testing because of his religious beliefs.

The lawsuit, which is the first of its kind on behalf of a Sikh officer, demands that the U.S. military accommodate his Sikh turban, unshorn hair and unshorn beard and abandon its unfair and discriminatory testing, which is scheduled for Tuesday, March 1. Once the testing is enjoined, Captain Singh seeks a further ruling directing the Army to make his religious accommodation permanent. Only three Sikh Americans have been granted the opportunity to serve full time without removing their unshorn hair and turban since the restrictive ban was implemented in 1981.

“I have so much pride in my Sikh identity and service to my nation,” said Captain Singh in December after receiving his temporary accommodation. “To feel spiritually whole, while continuing my military career, has always been the dream.” 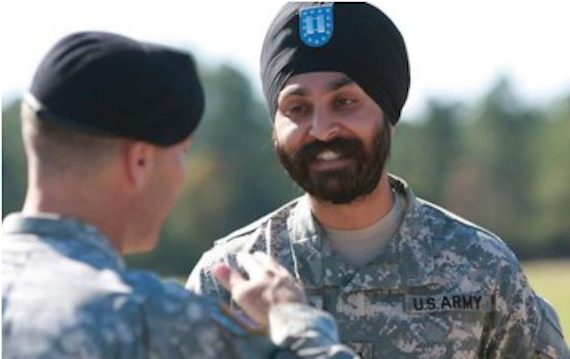 Captain Singh was granted a temporary accommodation until March 31, 2016, to serve in the U.S. Army while maintaining his Sikh articles of faith. On February 26, 2016, Captain Singh was ordered to report on March 1 for additional testing that no other soldier in the U.S. Army has been subject to as a precondition for remaining in the Army, including other soldiers permitted to maintain beards for medical reasons and the previously-accommodated Sikh soldiers. Captain Singh is more than willing to undergo the same safety testing as any other soldier, but he objects to being treated differently on account of his faith.

Captain Simratpal Singh enrolled in West Point in 2006, but was then forced to choose between his religion and career. After failed attempts to obtain an accommodation, Captain Singh succumbed to the pressure of conformity and cut his hair and shaved his beard in an effort to fulfill his childhood dream of serving his country. He then went on to graduate from West Point with honors in 2010.

Nearly ten years later, after successfully completing the Army’s grueling Ranger School, earning a Bronze Star for clearing roads in Afghanistan of explosive devices, and receiving numerous other military accolades in various positions, Captain Singh’s one regret was compromising his religion in order to serve his country.

“Captain Singh is being subject to discriminatory testing that isn’t required of any other soldiers, even those with medical or religious accommodations. The Army cannot delay in providing him his statutory and constitutionally mandated right to an accommodation to serve as an observant Sikh in the Army,” said the Sikh Coalition’s Legal Director, Harsimran Kaur. The Sikh Coalition represents Captain Singh along with the Becket Fund for Religious Liberty and the law firm of McDermott Will & Emery.

The Sikh Coalition also represents the three previously accommodated Sikh clients with the law firm of McDermott Will & Emery.

“Captain Singh is a decorated war hero. The Army should be trying to get more soldiers like him, not banning them from serving or punishing them for their beliefs,” said Eric Baxter, Senior Counsel at the Becket Fund for Religious Liberty. “It’s time for the Pentagon to stop playing games and start doing the right thing – for Captain Singh, for Sikh Americans, and for all Americans.”

“For years we have worked to avoid litigation under the guiding belief that the U.S. military would finally do the right thing,” said Amandeep Sidhu, Partner at McDermott Will & Emery. “The U.S. Constitution and the Religious Freedom Restoration Act make it clear that Captain Singh has the right to practice his faith in the military and we are confident that the court will agree.”