Toronto, Canada (December 28, 2013): Respected Ontario, Canada Member of Provincial Parliament (MPP) Jagmeet Singh has been denied an entry visa by the Government of India. The denial, given without explanation resulted in MPP Jagmeet Singh missing a significant gala event in Amritsar hosted by the non profit organization SEWA, that selected Jagmeet Singh as ‘Sikh of the Year’ for 2013. 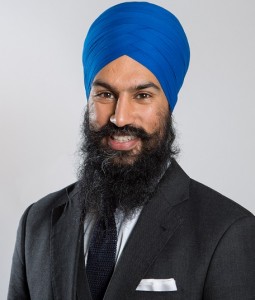 “Not only is the denial of an entry visa to a Canadian elected official a shocking decision by the Indian government,” says MPP Jagmeet Singh, “it is an affront to the people of the country of Canada, which is a country where hundreds of thousands of Indian ex-pats make their home and the Government of India has identified as a close economic priority and ally. My own parents left Punjab for Canada over 35 years ago but I continue to have strong ties with family and friends there.”

Further insult is added to this particular situation as MPP Jagmeet Singh’s family has a long and proud history of sacrifice for the people of India. His great grandfather Sewa Singh Tikriwala Shaheed gave his life in the struggle for freedom; his father’s oldest brother Shiv Charan Singh Dhaliwal (taya ji) was a lieutenant and died in the Indo-Pak war of 1972 and his father’s second oldest brother Gurdatar Singh is a retired General of the Indian Army.

MPP Jagmeet Singh has traveled to India on many occasions, including as recently as January, 2013, and suspects this outrageous decision by the Government of India is a result of his continued advocacy against human rights offenses and policies in India.

“It is my belief that true democracy is not merely a political ideal but a complete social philosophy, and the right to freedom of expression is a cornerstone of democratic freedoms,” says MPP Singh. “As a Canadian elected official I believe it is my obligation to speak out against injustice.”

The SEWA Sikh of the Year Award was presented at an award ceremony at the International Fateh Academy in Amritsar. MPP Singh received his award in a video presentation played to the crowd, which included a number of highly influential representatives of a number of global charities as well as “5 Singh Sahibaan” which included the Jathedar of the Akal Takht and other notable dignitaries.

Jagmeet Singh, Ontario Member of Provincial Parliament. MPP Singh represents the electoral district of Bramalea—Gore—Malton for the Ontario New Democratic Party, the 4th largest riding (by population) in Canada. The 34 -year-old MPP is a lawyer and outspoken advocate for a number of human rights issues in Canada and globally. He has been named one of Toronto’s ‘top 12 personalities to watch’. Mr. Singh has been recognized as one of the 5 rising stars in Toronto Life’s 50 Most Influential list.

A non-profit organization based in India and committed to social justice initiatives like ending drug abuse, promoting the equality of women by opposing both the dowry system and female feticide. The annual Sikh of the Year award is given to a single recipient in recognition for his or her work in the area of human rights and humanitarian issues.