Jarnail Singh told Sikh Siyasat News that the motion was passed unanimously by the state assembly on 29 June, 2015.

English translation of motion moved in Hindi reads as follows:

This House strongly condemns the massacre (जनसंहार) of Sikhs in the national capital in November 1984 and offers its deepest condolences to those innocent people who lost their lives for no fault of theirs. This House expresses its deep anguish that despite more than three decades having passed, the family members and close relatives of riots victims are still running from pillar to post in search of justice, which has unfortunately eluded them so far. This House requests the central government to take immediate cognizance of the recent revelations made against Congress leader Jagdish Tytler in affidavits of the CBI by one Abhishek Verma, that this Congress leader influenced witnesses and made payments through Hawala, and order registration of a criminal case against him under relevant sections of the Indian Penal Code (IPC). This House is of the strong opinion that urgent efforts must be made to ensure all those involved in this genocide must be given exemplary punishment. The Special Investigation Team (SIT) notified by the union Home Ministry earlier this year must be asked to submit its report within the stipulated deadline. All cases which were closed by the Delhi Police, which is itself an accused organization of the 1984 riots, must be reopened and investigated by an impartial agency. This House also resolves that all the compensation announced for the next of kin of the riots victims must be immediately disbursed, so that it reaches them.

Text of motion, in Hindi, as provided by Journalist Jarnail Singh reads as follows:- 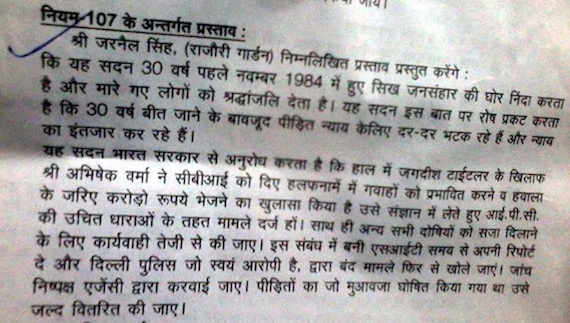