New Delhi: The Delhi unit of Shiromani Akali Dal (Badal) MLAs and other leaders today held a massive protest to gherao residence of Chief Minister of Delhi and AAP Convener Mr. Arvind Kejriwal. This protest was held to raise voice against the alleged drug smuggling being carried out by AAP leadership in Punjab. 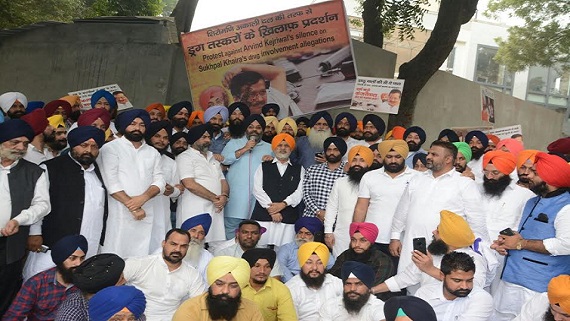 While interacting with the media SAD (Badal) maintained that use of force against us cannot suppress the voice of Punjabis. They said that Arvind Kejriwal was a coward and instead of taking actions against his leadership who is indulging in alleged drug smuggling to destroy the Punjab youth, he is sheltering such elements. On the occasion Badal Dal spokesman Mr. Manjinder Singh Sirsa asked Arvind Kejriwal Kejriwal why he was so scared to take action against Khaira?

Additionally, he also Arvind Kejriwal  that he had claimed that he has come to clean the politics of the country but people of national particularly of Punjab want to know from him when his legislature party will be cleaned from drug smuggling?

Furthermore, SAD (Badal) claimed that though Kejriwal has tried to suppress voice of truth with use of police force against us today but this protest and campaign against him will continue till he  takes action against his party leaders including Sukhpal Khaira and accepts his own guilt in this drug trade.