Amritsar: Dal Khalsa today took a dig at rulers of Punjab for failing to deliver ‘real justice’ to victims of police firing in Behbal Kalan and instead resorted to time-tested cheap tactics of offering cash or job to kin or building memorial in victim’s memory. The organization feels compensation without bringing the guilty cops to book means a little.

Dal Khalsa spokesperson Kanwar Pal Singh said Sukhbir took days and weeks to muster courage to meet the aggrieved family members without bothering to ensuring the arrest of cops that ordered police firing on protesters who were staging peaceful protest against the sacrilege of Guru Granth Sahib.

It’s typical style of governments be it Union or state to silence voices of victims by offering them monetary compensations. 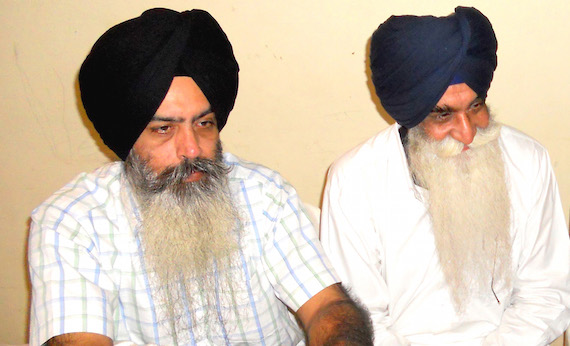 He asked Sukhbir to explain the difference between his Akali led government and the successive governments at Centre that have denied justice to victims of Nov 1984 killings and instead has doled out financial compensation to them.

Dal Khalsa clarified that in the eyes of law, offering financial compensation to victims of state terrorism was secondary and it would never be considered as justice in real terms.

Reiterating that nothing short of arrest of erring cops would soothe the hurt sentiments of family members in general and community in particular, he said both father-son running the government were playing dual game with the people.

Senior Badal’s tone and tenor was apologetic while junior Badal was spewing fire on dissenting Sikhs, said he while condemning the arrest of Panthic leaders on flimsy grounds.

Asserting that sedition law was being misused by all governments to fix their adversaries, Advocate Harpal Singh Cheema, chairman Sikhs for Human Rights said dissent was not sedition. Terming the arrest of Panthic leaders as unconstitutional, he said the apex court has ruled that seeking Khalistan through peaceful means was neither illegal nor seditious.