Jalandhar: The potato growers of the Doaba region of Punjab on Monday dumped their harvest of potatoes on National Highway 1 to protest against the slump in prices of the commodity which is because of grave difference between the input cost and the price it is currently fetching at the grain market.

As reported by the media the farmers lead by Bhartiya Kisan Union (Qadian),  first held a meeting at Dana Mandi in Kartarpur and then unloaded the trolleys of potatoes on the road. This led to blockade on the NH as vehicles were finding it difficult to negotiate through crushed potatoes. Later, the administration cleared the road with JCB machines. 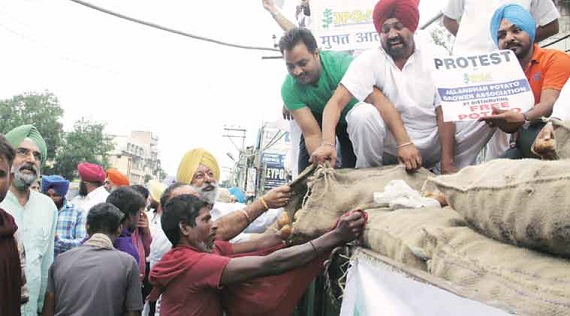 Farmers dumping their harvest while protesting against union govt.(Photo by Indian Express)

Furthermore, they reportedly said that while potato crop was going waste, the seeds for next maize crop had been made expensive. They also opposed giving out river waters from Punjab saying state was already grappling with water crisis as underground water table had severely depleted.