Dera Verdict A Judicial Decision Not A Thing To Be Either Welcomed Or Rejected: Amarinder Singh, Sukhbir Badal Hails The Judgement

Chandigarh: In a typical diplomatic statement the Punjab chief minister Amarinder Singh here on Monday while speaking on the sentencing of Dera Sauda Sirsa chief Gurmeet Ram Rahim to 20 years in jail for rape reportedly said that it is “not a thing to be either welcomed or rejected”. 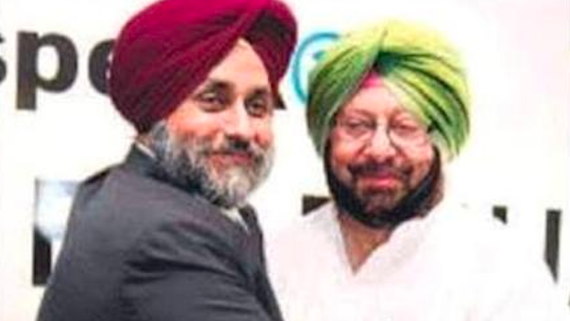 The chief minister was addressing a press conference after apprising the Punjab governor V P Badnore about current law and order situation preceding the conviction of Gurmmet Ram Rahim. While carefully maneuvering  the imperatives of the electoral politics Amarinder Singh when asked about his view about the verdict against Dera head to which he replied that “not a thing to be either welcomed or rejected”.

It was a judicial decision which everyone had to “accept”, he said, adding that he was only interested in ensuring law and order in Punjab, he adds.

“The judgment is historic and exemplary. No one is above the law. But the violence in parts of Haryana was unfortunate. The Manohar Lal Khattar government failed to make proper security arrangements,” he said.

It is interested to note here that all these years in power the SAD (Badal) lead by Badal family has been enjoying electoral support from Dera Sauda Sirsa chief Gurmeet Ram Rahim, by visiting his Dera headquarter in Sirsa and pleading in front of him for electoral support in lieu of political patronage, but after the August 25th action of state against the Dera chief all of sudden the Badal family seems to have changed its political equation with him.