Bathinda: The Bathinda police reportedly recovered 11 suspected detonator devices from an accident hit car belonging to a ruling party leader from Rattakhera village. Interestingly the police has lodged an FIR against ‘unknown persons’ under the Explosives Act. 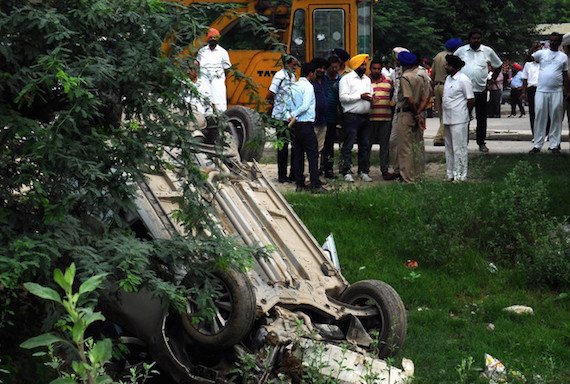 [A view of accident spot]

As per media reports, the police had recovered 11 suspected detonators on August 14 from the car of former SAD (Badal) sarpanch Kulwinder Singh of Rattakhera village, which falls in the Chief Minister’s constituency, Lambi in Bathinda.

Car of SAD (B) leader had reportedly met with accident on Aug. 14 evening near Lehra Mohabbat Thermal Plant, Bathinda when he along with his brother Lakhwinder Singh, was returning from Chandigarh after meeting Punjab CM.

As per media reports both SAD (B) leaders had left their car that had overturned on the spot and went to Bathinda Circuit house in another car.