Soon we are approaching the days when 33 years ago ruling Congress government in India led by Rajeev Gandhi committed 1984 Sikh Genocide killing thousands of innocent Sikhs, raping hundreds of women, burning houses and businesses of the Sikh community. And the worst thing is that Rajeev Gandhi openly justified killing thousands of innocents and not only defending but also rewarding the guilty Congress leaders and police officers involved in innocent killings. So far in 33 years the Indian ruling Governments have failed to punish the guilty and provide justice to the victim families.

The Sikh community living in western countries have been raising voice against innocent killings and human rights violations in India. And demanding justice for the victim families and punishment to the guilty. But because the Indian government was protecting the guilty and not doing anything for the victim families, it was getting very frustrating for the community.

But thanks to WaheGuru’s blessings some smart personalities came up with very intelligent plans. Rather than getting frustrated, they decided to start a Sikh Nation Blood Donation drive to save lives in 1999. The great idea was to save lives and at the same time remember and pay homage to the innocent lives lost. And also remind the world about 1984 Sikh Genocide and innocent lives lost. 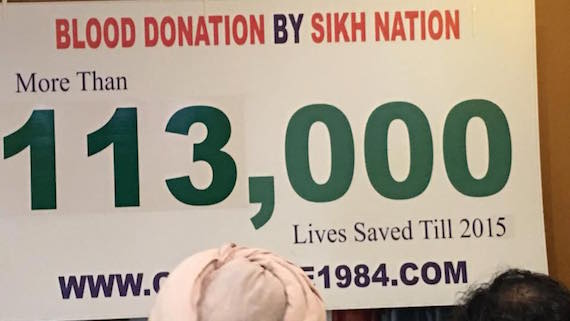 And this years Sikh Nation Blood Donation drive will be starting again the first weekend in November. Once again it is a great opportunity for our people to donate blood and help save lives. It is the best thing you can do. I’ll especially request the youngsters to come to donate blood. And see how much satisfaction you’ll get after donating blood and save a live. Please join and help succeed this drive to save lives and to pay homage to thousands of innocent lives lost in 1984 Sikh Genocide.