Chandigarh: It is learnt that representatives of various diaspora Sikh organizationsrecently held a meeting a meeting in England and decided to form an organisation called: “The World Sikh Parliament”. A written press release issued in this regard (copy available with the Sikh Siyasat News), states that Sikhs living in different parts of the World, rising above personal/family and group promotion, have been able to establish “a Supreme Organizations of the Sikhs “The World Sikh Parliament (WSP)”.”

The press release further reads: “It has been constituted in-line with the Sikh traditions, to provide authentic guidance to the community on social, Political, Spiritual and religious matters and to spread the message of universal brotherhood of Gurbani, involving Sikh institutions/organizations and members of the Sikh community from all over the World. It is a not-for-profit charitable organization”. 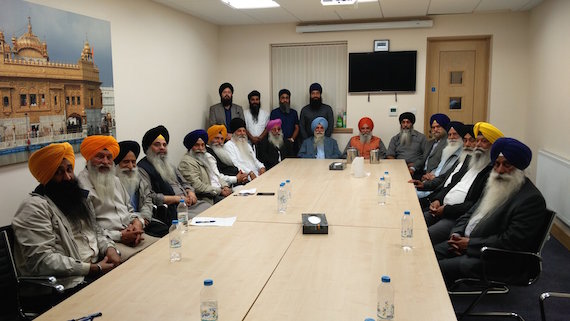 “It will include activities such as advancing health, promoting or protecting human rights, education, development or environmental programs. Long awaited system/rules and regulations for the important institution of Akal Takhat Sahib and process of conducting Sarbat Khalsa have been clearly defined for the first time. Sikh Sangat all over the world is humbly requested to support this initiative uniting the Panth under one umbrella organization in the light of Gurbani reviving the concept of Miri and Piri”, the release reads further.

The statement said that the World Sikh Parliament will ensure freedom, liberty and justice for the Sikh nation and the people of Punjab and In the diaspora this means campaigning and lobbying for the right to self determination for the Sikhs and the establishment of a sovereign Sikh State.

“In India WSP reps will ensure that Sikh identity is promoted, maintained and strengthened. It will have five zones with members of the Governing Board (GB) from each zone as under: India-150, USA-30, Canada-30, Australia-30, Europe-60. 75 Members of the GB from different countries have been finalized and balance number is yet to be finalized”, reads the statement.

AS per statement the large number of GB members and prominent Sikh leaders representing various Sikh institution of UK present in Guru Nanak Gurudwara, Smethwick unanimously decided that the further process of identifying of more members including youth and females should be continued by the coordination committee comprising of the following members and should be completed at the earliest. These names should be identified from Different Sikh organizations, Political groups or prominent Gusikhs from different countries.