The new set up that will allow for international co-ordination of political activities around a shared global agenda that is being developed is expected to double the number of countries it covers within 12-18 months.

The Sikh Federation (UK) is working with Sikhs from a dozen other countries on preparations, finalising the global agenda and names of representatives from different countries. The launch event is expected to be in Paris towards the end of March. 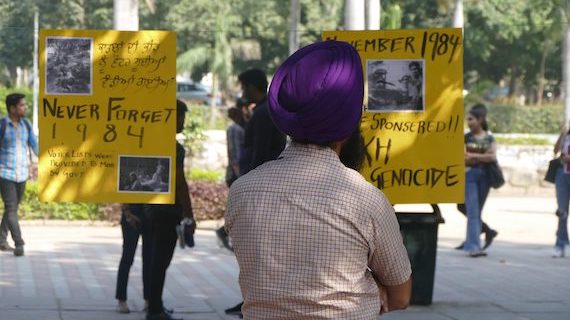 On Wednesday the BJP Indian government told the Supreme Court it accepted the findings in the report by the Justice S.N. Dhingra committee that was submitted to the court in November 2019.

The Justice S.N. Dhingra committee investigated 199 cases linked to the 1984 Sikh Genocide that were closed by the Supreme Court and its findings are damning for the police and judiciary.

They have found at best the police lacked interest in investigating. They did not preserve forensic evidence and in some cases failed to do the basics, such as, contacting the family members of those killed. In one case they noted that the investigating officer and the authorities were “not interested in getting the culprits punished” despite “overwhelming evidence”.

They have also highlighted that police officers “conspired” with the perpetrators of the 1984 Sikh Genocide. For example, Inspector Tyagi deliberately disarmed local Sikhs of their licensed arms so that the perpetrators could make them victims and cause loss of life and property. Tyagi was suspended from service but later reinstated and promoted to assistant commissioner of police.

The judiciary were also all too happy to acquit those charged. They have found faults with the way certain judges had conducted trials as well, stating that the judges handed acquittals “in a routine manner”. They have pointed out several loopholes in trials: “None of the judgments on record show that the judges were alive to the situation” of the 1984 Sikh Genocide or “were alive to the fact that for delay in lodging FIRs and statement of witnesses, the victims were not responsible.”

The Justice S.N. Dhingra committee was formed in 2015 by the BJP government after ten earlier commissions, committees or panels since 1984. The last Commission was the Nanavati Commission set up in 2000 that reported in 2005.

Although the Nanavati Commission directly implicated leading Congress politicians: Jagdish Tytler, Kamal Nath and Sajjan Kumar only the latter has been found guilty and sentenced to life imprisonment in December 2018. It took more than 34 years after the 1984 Sikh Genocide for one leading politician to be found guilty. He is appealing to the Supreme Court to have his life sentence reduced.

“Our experiences from the last 35 years and this latest report shows the police, politicians and judiciary in India are corrupt to the core and the wheels of justice hardly turn. It is therefore impossible to secure justice within the Indian system for the 1984 Sikh Genocide.“

“With the work we have already undertaken in several countries and have planned in other countries we are confident in securing the support of the majority of the five members of the UN Security Council to launch a Rwanda-style International Criminal Tribunal looking into the crimes committed in the 1984 Sikh Genocide.”

“It is the entire Indian machinery – the police, armed forces, politicians, judiciary, state-owned media and the perpetrators of the 1984 Sikh Genocide that must be put on trial in an international arena.”

“The world must be left in no doubt who was responsible for trying to wipe out the minority Sikh community throughout India in 1984 and why the only form of justice now available for Sikhs is to exercise their right to self-determination and an independent sovereign Sikh homeland.”