Toronto, Canada: In a letter written to the Canadian Prime Minister Justin Trudeau, former Punjab CM and Punjab Congress chief Capt. Amarinder Singh has expressed disappointment over restrictions imposed by the Canadian authorities, whereby he was restrained from holding public rallies in Canada. Amarinder Singh is on a trip of Canada to gather support of Punjabis settled there, for upcoming Punjab polls 2017. He was set to hold public rallies in Toronto and Vancouver. 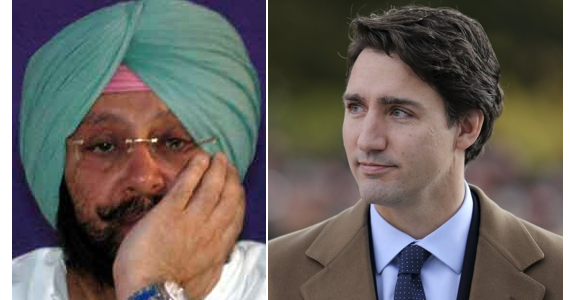 “I was told my our Foreign Secretary, Dr S Jaishankar that your government has not allowed my public interactions during my proposed visit to your country. I was scheduled to interact with the Punjabi diaspora living in the two cities of Toronto and Vancouver. Needless to say, it has come as a disappointment that someone representing the largest democracy in the world has been refused to reach out to, and interact with, his fellow Punjabis living in a respected democracy like Canada”, Capt. Amarinder wrote in his letter (copy available with the Sikh Siyasat News).

Offering clarifications in his letter (copy also available on Capt. Amarinder’s Twitter timeline), PPCC chief wrote: “Let my clarify that I have no intentions of carrying out any ‘election campaign’ here, as there are no elections right now in Punjab. Nor do I have any plans to set up any “political party” or movement in Canada”.

Terming the Canadian government’s directions as “GAG ORDER”, Indian political said that the concerned order has undermined his “Fundamental Freedoms”.

Congress party’s Punjab chief claimed that he had planned to visit Canada to interact with his fellow Punjabis at personal level to learn about their experiences and seek their opinions.

Notably, Capt. Amarinder is not restricted by the Canadian government form meeting people personally or from holding private gatherings.