Chandigarh: The investigating panel that was set up by the Shiromani Gurdwara Prabhandak Committee (SGPC) to hold probe against Punjab Cabinet Minister Sikander Maluka in ‘distortion of Sikh Ardas’ issue has submitted its report at Akal Takhat Sahib.

Sikander Maluka who has been a controversial leader of the ruling SAD (Badal) was involved in an act of distortion of Sikh ardas on 26th December 2016 at the inaugural of his regional office in Rampura town of Bathinda district  were he openly accommodated Hindutva element who distorted the Sikh Ardas (Prayer) after reciting hymes from Hindu mythological text of Ramayna, the reverberation of which outraged the Sikhs at large.

The three-member probe panel led by SGPC vice-president Buta Singh Gurthari had talked to Sikandar Maluka to Bathinda-based Haji Rattan Gurdwara Sahib on Saturday. He was reportedly asked to come out with his version on the controversial issue. 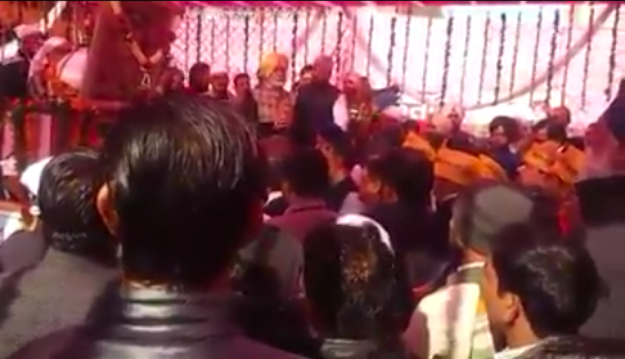 As per media reports Buta Singh Gurthari said Sikandar Maluka had maintained that the BJP and certain Hindu organisations had organised the event of his office opening and he had just participated.

It is notable that the SGPC appointed Jatherdars have summoned the controversial minister Sikander Maluka on 8th January. Interestingly, the acting Jathedars appointed by the November 10, 2015 Pathic gathering had already summoned Sikander Maluka to give clarifications on January 9.

Sikandar Maluka has been under relentless wave of criticism from the Sikhs in particular and this episode has further lead to fuming unrest among the Sikhs, Meanwhile vehement criticism was witnessed from different Sikh bodies as well as Sikh personalities Talking to the Sikh Siyasat News (SSN) over phone former Akal Takht Jathedar Bhai Ranjit Singh said that Punjab CM Parkash Singh Badal has been hell bent to damage Sikh tenets, values and ethos. “I have been outcrying for past two decades that Parkash Singh Badal aims at harming and destroying basic roots of the Sikhi and it is clearly visible to everyone”, he added.