Amritsar: Makers of “Singh Is Bling” movie have invited irk from Shiromani Gurdwara Prabhandak Committee (SGPC). SGPC has clarified that no clean chit was yet granted to the movie whose promo-song and trailer had triggered controversy, and further that the makers of the movie should get clearance from SGPC panel before releasing it.

SGPC chief Avtar Singh Makkar said: “SGPC has the right to review any movie which may hurt the Sikh sentiments”.

Notably, DSGMC had maintained in a recent statement the that makers of “Singh is Bling” movie had agreed to remove objectionable portions of the film, maintaining that the controversy realated the film was over. 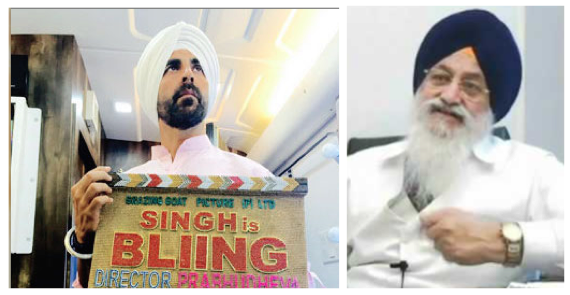 SGPC want makers of Singh Is Bling to get its clearance

But SGPC chief Avtar Singh Makkar maintains that the DSGMC has no right to give a clean chit to the movie. If the film’s producer doesn’t get it cleared from us, we will resort to legal recourse against him.”

He said the filmmaker must remove the “objectionable scenes” and show the movie to the SGPC to take its consent.

He said the SGPC had already constituted a sub-committee which would take a call on objectionable scenes in the movie. He said the Akal Takht Jathedar had also expressed his reservation regarding some scenes in the film. He raised objection to the projection of semi-clad women on the film’s poster with a “Kara” having “Gurbani” inscribed on it in the background. Besides, he also objected to showing the Golden Temple along with liquor as the things for which Punjab is famous. He warned that if these issues were not addressed, the SGPC would initiate strict action.