Chandigarh: As the awareness move against drugs is spreading across the state, fresh evidence is emerging against Punjab police’s widespread involvement in drugs abuse and trade. After drug addict women exposed role of Punjab cops, another drug addict and paddler has named Punjab cops indulged in this ‘death trade’.

A drug addict and paddler named Babloo has come forward to seek de-addiction and reformation in Arniwala area of Fazilka district in Punjab. Whereas local population has decided to extend him support, the local police attempted to arrest him soon after he expressed willingness to reform.

A video that surfaced over social media shows that people opposed Babloo’s arrest where as police officials who had come to arrest him escaped from the scene after Babloo accused the them of taking bribe for facilitating drugs paddling and trade in the area. 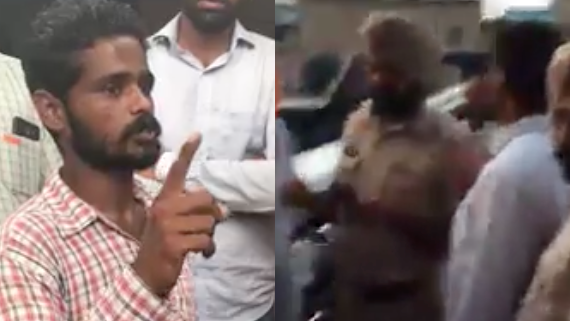 In this video people could be seen posing question that why the police personnel were quick to seek his arrest after he announced to expose the cops involved in drugs trade?

“Ajj e main aaean te ajj e fadna, rozana te main turia-firdan agge-piche cheta ni aaea ena nu?” (Today I came forward and they are here to arrest me. I am not hiding any where, why they did not they arrest me earlier), asked Babloo.

Someone from background said that he has announced to name the cops involved in drugs trade. “Dasun Ga, Dasun Ga” (I will tell), said Babloo while putting his hand on his chest.

“Hun Banda Ban Jaain” (don’t miss this chance to get yourself reformed) someone said from the background and Babloo replied that he will name cops involved in drugs trade.

He said if he steps backward at any stage, people need not to come after him or to support him.

Someone said from the background that if the police takes him away today then no body would come forwards to expose police-drug traders’ nexus.

People then brought him close to cops and he accused a cop named Pargat having taken bribe of Rupees five thousand to facilitate drugs trade. When the cops denies, Babloo and some other people asked the cops to take oath which he did. Babloo said that the cop has taken false oath but the other cop says when Pargat has denied on oath it settles the matter. Babloo asks another cop named Sukhwinder that why did he (Babloo) not named him, suggesting that Pargat was actually involved in facilitating drugs trade. The cops then left the scene.

After cops left the scene, Babloo said that Pargat is not alone and there are five to ten other cops who take bribe to facilitate drugs in the area and some of them are addicts themselves. He then named Surjit Singh (CIA Staff, Dabbwali), Ravi (CIA Staff), Harpal, SHO Punjab Singh, Mandeep (Gun man of DSP). He said that SHO Punjab was responsible for two drugs related deaths in Arniwala. He claimed that the drug paddlers were arrested with drugs and weighing machine but SHO Punjab Singh let them off after taking bribe.

He said that police officials came to him few days back and asked that they were to register a case as there was pressure from SSP office to act against drugs paddlers. He said that the cops asked him to get registered any drugs related case. He said that he took them to someone who was selling intoxicating pills and further maintained that after the police got ‘their case’ they let him off despite the fact that his name was on top of the list of drug paddlers.

They had shown me the list, my name was on top but after I got them their case, they let me off. They knew that I know their secrets so at that time they did not act against me, he added.

In another video (surfaced over social media) apparently recorded next day Babloo names drug paddlers and police officials. A person informed in this video that after villagers approached SSP, he deputed a DSP to inquire into this matter.