Chandigarh: During the hearing of a matter related to drugs trafficking in Punjab, IPS officer Siddharth Chattopadhyay on Friday levelled serious allegations against his colleagues DGP Suresh Arora and Dinkar Gupta before obtaining a stay in a case he was being allegedly falsely implicated in.

It is learnt that DGP (HRD) Chattopadhyay claimed that investigations carried out by a Special Investigation Team (SIT) headed by him against Moga SSP Rajjit Singh in the drug case were leading him to Punjab’s top cops. 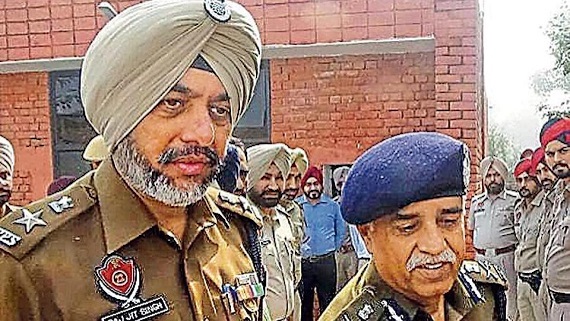 It is notably that Chattopadhyay, along with two other senior officers, were directed by the Punjab and Haryana High Court to look into the complicity between dismissed Inspector Inderjit Singh and Moga SSP Rajjit Singh “to break the nexus between the law enforcement agency and drug traffickers”.

“In his 10-page application, Chattopadhyay not only alleged harassment, but also claimed that the role of Punjab DGP Suresh Arora and DGP (Intelligence) Dinkar Gupta had “come to light” during the course of investigation carried out by him under the High Court directions”, notes a report English vernacular, The Tribune (TT).

“Several significant facts and pointers, including the ‘benami’ house of a DGP, are being investigated to confirm their involvement in the case with Inspector Inderjit Singh and Moga SSP Raj Jit Singh,” Chattopadhyay said, placing before the Bench six annexures in a “sealed cover”.

He said both “seniormost officers” Arora and Gupta were also supervisory officers of SIT members probing the case he was being implicated in. “The promotion, posting as well as career progression of the SIT members are in the hands of these senior officers,” he pointed out.

Chattopadhyay alleged that he was being targeted “at the behest of senior police officers whose role was under investigation for being closely associated with Raj Jit Singh and Inderjit Singh” in a case registered on January 3 in Amritsar after Inderpreet Singh Chadha, son of the former Chief Khalsa Diwan president CS Chadha, committed suicide.He alleged that the SIT under IGP (Crime) LK Yadav was harassing him even though he had had no connection with Chadha and was just a member of the NRI commission which had passed orders in a dispute concerning him.

After hearing him and amicus curiae Anupam Gupta, Justice Surya Kant and Justice Shekher Dhawan stayed the investigation in the suicide case related to Chattopadhyay and directed the submission of the investigation report against the other accused before the Bench.

A report in The Print, quotes Suresh Arora saying as: “I have learnt that an application filed by my colleague in the honourable high court today carries my name. Though I have not received any official intimation of the same, but from what I have learnt from media persons, I categorically deny the allegations levelled in the application. A detailed reply, if needed, will be given at the appropriate time”.

What is Chattopadhyaya investigating?

A raid by the STF on his official residence led to the recovery of four kilograms of heroin, an AK-47 and other weapons, and Rs 16 lakh. Inderjit allegedly admitted to his links with cross-border drug smugglers and was immediately dismissed from service.

In Inderjit’s interrogation, Raj Jit was allegedly identified as his “patron”, following which the SSP was also questioned by the STF. In December, Raj Jit moved the high court, alleging that STF head Harpreet Singh Sidhu was “inimical” towards him and seeking that the probe against him be shifted to another officer or an independent agency.

It was on his application that the high court ordered the creation of a three-member SIT under Chattopadhyaya. The SIT has since submitted two interim reports to the court in sealed cover.

Chattopadhyaya is expected to submit another report to the court on the next date of hearing on 9 May. (Source: The Print)

On 3 January, businessman Inderpreet Chadha, a cousin of slain liquor baron Ponty Chadha, committed suicide. A viral video of his octogenarian father with a woman school principal is believed to be the trigger, and Chadha allegedly left behind two suicide notes naming several people. Nine people have been arrested so far for allegedly abetting Chadha’s suicide.

Chadha’s family members also handed over to police his diary/notes from 2016, wherein he reportedly named Chattopadhyaya as well as a retired and an incumbent judge of the high court. Chadha was reportedly upset over certain judicial orders passed by a commission while Chattopadhyaya was a member and the retired high court judge its chairperson.

Repeatedly referring to the two high court judges named in Chadha’s notes, advocate Gupta told the court Friday that if the suicide investigation was bona fide, the judicial officers should also have been probed, if not arrested.

“All the orders signed by Chattopadhayaya as member of the NRI commission were dictated by the retired high court judge steering the commission and signed by him as well,” he argued. (Source: The Print)