Notably, the NIT turned new focus of so-called nationalism debate in the Indian subcontinent after a clash had took place between local (Kashmiri) students and a group of other students who term them-selves as “non-Kashmiri Indian students’. The clash was reportedly sparked by defeat of Indian cricket team by West-Indies in a semi-final of T-20 World cup few days ago.

Non-Kashmiri students have been alleging that they were taunted by Kashmiri students after the Indian cricket team faced defeat. These students, who have been boycotting classes in NIT Srinagar are demanding to shift the institute out-of Kashmir region, allege that they were beaten by the police while they were expressing their patriotic feelings by holding a march with tri-colour Indian flag. 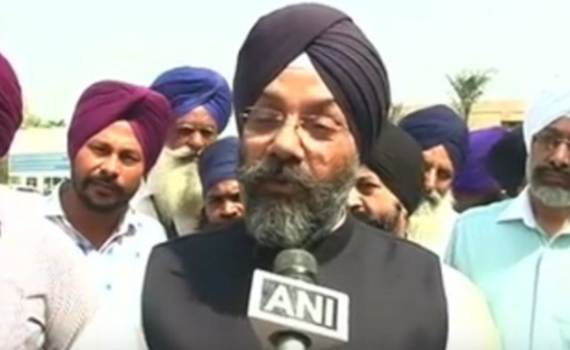 In this backdrop, Manjit Singh GK of DSGMC and one Tajinder Pal Singh Bagaa of Bhagat Singh Kranti Sena, who term themselves as ‘Indian nationalists’, yesterday sent a bus of some youth to present Indian flag to non-Kashmiri students in NIT campus.

Talking to media-persons Bagga reportedly said: “The non-Kashmiri students of NIT Srinagar were barred from hoisting the ‘national’ flag on the soil of their own motherland. We want to take the Tricolour from all over India and from places that we cross enroute and present all of them to the agitating students”.

Manjit Singh GK, who flagged off the bus from a Gurdwara Shaib in Delhi said that the region from Kanyakumari to Kashmir was inseparable part of India and he will do everything for its unity.

Sikh Youth of Punjab has reacted sharply to GK’s statement.

“First- India is not one ‘nation’ from North to South and from East to West. In South Tamils are struggling, in North Sikhs and Kashmiris, in East Nagas are there, all are looking for freedom. India is not one nation it is combination of many. And if one don’t want to stay with India, it is there will. You cannot tie them forcefully”, the Sikh Youth body posted on it’s Facebook page.

“Second- Your statement about NIT crises is looking out of knowledge. The way you waved the Indian flag was looking as if the army chief was sending troops to invade the enemy. Kashmiri are the people of Kashmir nation which is forcefully occupied by the India. Unfurling the tricolour extortionately in a nation which is not part of India is out of toleration” the statement reads further.

“On my own behalf I can only say that: being a president of a Sikh institution, is doesn’t suits you to take part against the freedom loving nation and that too when your own nation is walking at the path of that destiny”, said Sikh Youth of Punjab leader Paramjit Singh Mand.

Addressing to GK, Mand further said: “[y]our nation (Sikhs) are being assimilated and you are powering up the assimilator. Here at this stage one can judge your state of mind that ‘one side you are summoned just because you tried to save the property of Guru and on the other hand you are still believing in the symbols of that pseudo nation’.