USM activists opposed the movie by holding placards that were well explaining their ideology behind their opposition. Talking with the media persons, Manjinder Singh Sirsa said that the movie ‘Nanak Shah Fakir’ movie violates the tenets of Sikh Faith. He said that portrayal of Sikh Prophets in human form is strictly prohibited according to principles of Sikhism. He said that the movie ‘Nanak Shah Fakir’ is unacceptable to the Sikhs. 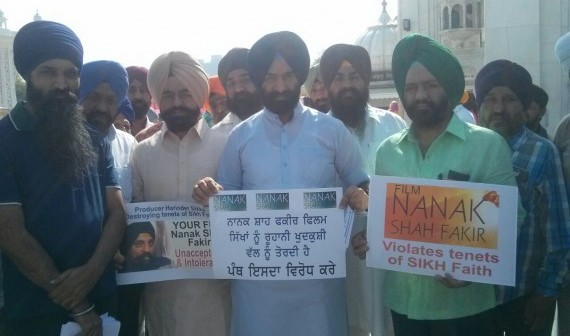 It notable here that the release of Animation Movie ‘Chaar Sahibzaade’ few months back had opened the path for such movies.

Talking to the Sikh Siyasat News (SSN), Sikh thinker and author S. Ajmer Singh said that depiction of Sikh Gurus through animation/ computer graphics/ portrait or cartoon is equally a depiction prohibited under Khalsa Panth’s traditions and tenets. “There is no different in depiction through human actor or personification through animation etc. It equally violates Panth’s long-standing stance against depiction of Sikh Gurus in any mode.”

Dr. Sewak Singh agreed also to the view that there was no difference in depiction of Sikh Gurus through human character or through computer graphics, portrait or animation.

S. Kanwarpal Singh of Dal Khalsa said any sort of depiction or personification of Sikh Guru Sahib was prohibited under Sikh tenets.

S. Prabhjot Singh, advisor of Sikh Youth of Punjab, also endorsed this view and said that computer graphics or animation was not something different from depiction of a character by human actor. What can not be shown through human actors, it can also not be depicted through other modes of presentation, be it computer graphics, cartoons or animation. Even portraits of Sikh Gurus is violation of Sikh tenets.

While talking to SSN over phone, Dr. Sewak Singh said that wrongful acceptance any such movie can not justify future attempts. If one sort of depiction somehow received acceptance, the efforts should be made to undo it and and question the acceptance of portraits of Sikh Gurus; and, in no case it could become a reference to justify future violations.