Washington: EcoSikh, a Washington based Sikh organization, has appealed to Sikhs and the people around the world to celebrate the World Sikh Environment Day on March 14, 2018 marking a tribute to Guru Har Rai Ji.

In a statement the EcoSikh said: “March 14 is an important day for Sikhs as it marks the enthronement day of seventh Sikh Guru, Guru Har Rai, who is remembered for his love for nature and care for animals. He is perhaps the first environmentalist in the South Asia who during his reign from 1644 to 1661 started and promoted herbal gardens and wild life refuge. EcoSikh has been facilitating the celebration of this day as Sikh Environment Day since 2010”. 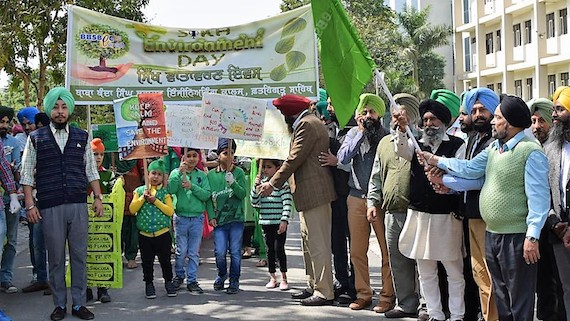 The Sikh body said that Sikh Environment day was celebrated in more than 4100 Sikh Gurdwaras, institutions, schools and communities across the globe. Celebrations were marked in many countries and people from different walks of life contributed in creating awareness and took steps to shape a sustainable future ahead. Most of the Sikh religious as well as non-Sikh bodies from more than 15 countries, 14 Indian states and 11 states in USA celebrated this Day.

Dr. Rajwant Singh, President of EcoSikh, said, “This day reminds us to care for nature and work for the betterment of the environment based on the teaching of Guru Har Rai ji. As Sikhs we are enjoined to see nature as a sacred and a divine gift and Gurbani gives us the same perspective. The world is facing a great threat on climate and it is our moral duty to take action. Sikh Environment Day is one such attempt.”

He added, “Sikh community across the world has supported this in an enthusiastic manner and we are certainly hoping a bigger response this year as well.”

Supreet Kaur, EcoSikh India President, said, “India and Punjab has lost green spaces in the last decade at an alarming rate and Northern India has faced unprecedented pollution and smog problem which has threatened the daily lives in the recent days. This crisis has severely affected children and other vulnerable population in several states in India. It has become critically important for all communities to take steps to save the natural environment and marking and celebrating Sikh Environment Day is one way that Sikhs would do their share.”

She added, “We appeal to all the gurdwaras, schools, colleges and governmental bodies to participate in this endeavor and show their seriousness to tackle the growing problem of environment which has been enveloping all of us.”

As per the EcoSikh, the Sikh Environment Day is considered as the largest global mass action on environment by a faith community. EcoSikh has also been active in organizing other initiatives on environment. Its recent green diwali campaign got a wide spread response and it has also been promoting organic langar in the gurdwaras. In addition, it focuses on promoting sustainable agriculture practices among farmers and has given leadership training to thousands of high school and college students in Punjab and adjoining states.