Srinagar: The California based Facebook a social networking site popular among youth blocked the page of Kashmir Ink, a sister publication of Valley’s leading English daily Greater Kashmir, after the editors of the local weekly here on Sunday to their sheer surprise and shock were unable access the said page. 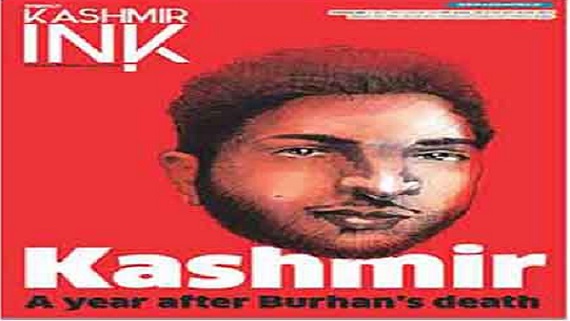 A grab of the cover picture posted on the Blocked FB page of Kashmir based Magazine.

It was reported by the media that the Kashmir Ink had posted the cover page of its latest issue, which showed a large portrait of Hizbul Mujahedeen commander Burhan Wani, gunned down in a police encounter last year, with the following text – Kashmir: A year after Burhan’s death.

The apprehensive Indian security agencies while taking a ‘precautionary measure’ here on Saturday imposed a blanket ban on internet access to check any supposed worsening of  law and order situation on the day that marked Burhan’s first death anniversary. Broadband and 2G mobile internet services were restored late on Saturday night.

On Sunday, as the Kashmir Ink tried to access its page, a message from Facebook popped up: “You’re temporarily blocked from posting. This temporary block will last for 24 hours, and you won’t be able to post on Facebook until it’s finished,” media sources said.

It was further stated by the editors that not only the official page of the weekly magazine was banned but also the the Burhan-related cover story was deleted along with it.

“This is completely unjustified… This was done without giving any prior intimation or reason,” reads the statement of Majid Maqbool,  executive editor, Kashmir Ink.

“Some ignoramus folks reported to the Facebook. The issue, as is evident from the cover, talks about the current situation in Kashmir after a year of an incident which rattled the valley,”  he further added to his statement.