Facebook is Helping Governments to Shut Down Dissent with Definition of Terrorism, says UN Expert

Geneva (3 September 2018): An independent expert appointed by the UN’s Human Rights Council has written to Facebook CEO Mark Zuckerberg to express concerns about the company’s overly broad definition of terrorism and the apparent lack of a comprehensive human rights-based approach to the policies governing access to and use of its platform.

The Special Rapporteur on the promotion and protection of human rights and fundamental freedoms while countering terrorism, Fionnuala Ní Aoláin, said Facebook’s definition equates all non-state groups that use violence in pursuit of any goals or ends to terrorist entities. 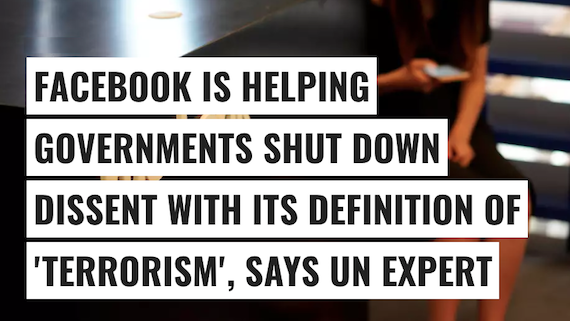 Facebook defines terrorist entities as: “Any non-governmental organization that engages in premeditated acts of violence against persons or property to intimidate a civilian population, government, or international organization in order to achieve a political, religious, or ideological aim.” Company policy prohibits terrorists from using Facebook’s services, and it uses detection technology and employs an ever-growing team of moderators assisted by a counter-terrorism team of 200 people to find and remove content from its platform.

“The use of such a sweeping definition is particularly worrying in light of a number of governments seeking to stigmatize diverse forms of dissent and opposition – whether peaceful or violent – as terrorism,” said Ní Aoláin.

The Special Rapporteur expressed concern at the lack of clarity about the methods by which Facebook determines when a person belongs to a particular group and whether the respective group or person are given the opportunity to meaningfully challenge such determination. The absence of any independent processes of review, oversight and monitoring of Facebook’s actions is also highly problematic, she added.

Ní Aoláin called on Facebook, as well as any other companies facing similar challenges, to adopt the model definitions of terrorism and incitement to terrorism developed by the mandate of the Special Rapporteur on the promotion and protection of human rights and fundamental freedoms while countering terrorism (A/HRC/16/51, Practices 7 and 8).

She said removal and blocking efforts should be focused on content of genuinely terrorist nature and/or content restricted in line with Articles 19(3) and 20 of the International Covenant on Civil and Political Rights and the standards spelled out in the Rabat Plan of Action on the prohibition of advocacy of national, racial or religious hatred that constitutes incitement to discrimination, hostility or violence (A/HRC/22/17/Add.4).

The Special Rapporteur welcomes Facebook’ openness to a dialogue with her mandate with a view to promoting greater compliance with these standards. She also recommends that other companies hosting third-party content be guided by the recommendations issued by and consider entering into a continued dialogue with her mandate and other relevant United Nations human rights mechanisms.