Chandigarh: It is learnt that amidst the ongoing controversy surrounding Facebook and Cambridge Analytica for massive privacy breach, the Facebook’s founder Mark Zuckerberg has issued a full-page advertisement in seven newspapers across the United Kingdom and three across the United States apologising for the data breach.

According to a report in The Verge, Mark Zuckerberg, in the advertisement, reiterated that the company has already stopped third-party apps from ‘getting so much information,’ and that Facebook has started ‘limiting the data apps get when you sign up’. 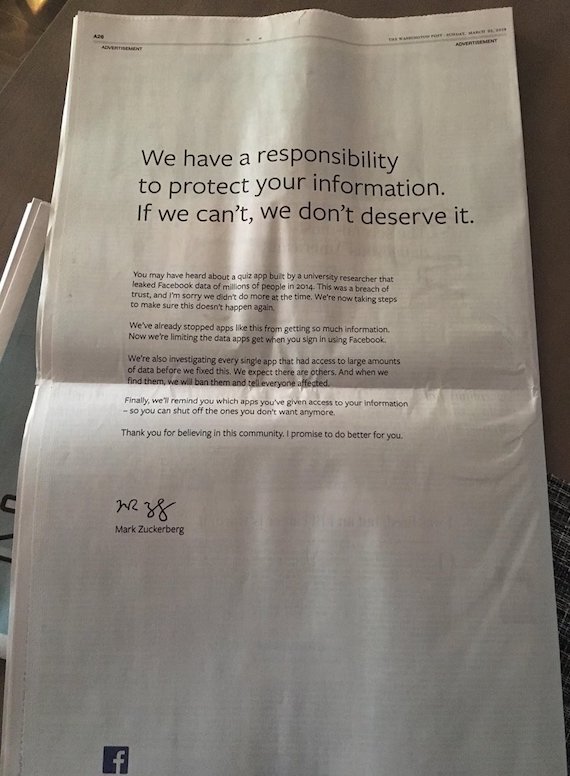 Facebook CEO reportedly said that users would be aware of which apps have access to their information and which don’t so that they can make an informed decision.

It is notable that Cambridge Analytica, the political data firm with ties to United States President Donald Trump’s 2016 election campaign, is under fire for allegedly gaining access to private information of more than 50 million Facebook users, and influencing elections by using this stolen data.

Earlier last week, the Facebook Chief had admitted to making mistakes over the Cambridge Analytica scandal, and said the social media giant needed to ‘step up’.

In a Facebook post Mark Zuckerberg wrote: “We have a responsibility to protect your data, and if we can’t then we don’t deserve to serve you. I’ve been working to understand exactly what happened and how to make sure this doesn’t happen again. The good news is that the most important actions to prevent this from happening again today we have already taken years ago. But we also made mistakes, there’s more to do, and we need to step up and do it.