Lathrop, CA, USA: Mar. 5, 2015– Ravinder Singh Gogi, American Citizen and owner of Dasmesh Truck Driving School in Lathrop, is being held as a political prisoner at the Ludhiana Jail in Punjab, India. His family and fellow business owners are demanding his release from police custody and will be holding a press conference on Friday, March 6 2015 at the Lathrop District Chamber of Commerce at 15104 South Harlan Road, Lathrop, CA 95330. 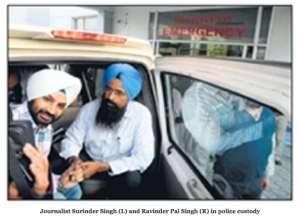 Ravinder Singh Gogi is an American citizen whose wife and two children live in Lathrop, California. Ravinder traveled to Punjab, India to be with his father, Bapu Surat Singh Khalsa, who is currently on day 47 of a hunger strike in protest of the detention of other Sikh political activists and journalists. His presence alongside his dying father led to his arrest on February 26, 2015 and has been interpreted by Indian police as a violation of a public peace ordinance (Section 107/151). The ordinance is often used to punish Indian minorities for expressing political views contrary to the ruling party.

Balbir Singh Dhillon, President of the Sacramento Sikh Gurdwara, who was held by Punjabi police in 1996 and believes that Ravinder’s life is in danger unless the United States gets involved on his behalf. “If I wasn’t an American citizen, I would’ve been killed,” added Dhillon who was imprisoned falsely for six months before he was released following calls from over 50 congressional reps.

“We are here to support businesses in our community and their families, and we pray for Ravinder’s return to Lathrop,” shared Ruben Sandoval, President of the Lathrop Chamber of Commerce. The Chamber will host a press conference for the Ravinder Singh family on Friday as the community and business owners will gather alongside Ravinder’s wife and teenage children, son Sahib (16) and daughter Avleen (13), to help bring awareness to this difficult situation.

About OFMI: Organization for Minorities of India was founded in 2006 to advance individual liberties of Christians, Buddhists, Dalits, Muslims, Sikhs, and all Mulnivasi people of South Asia by encouraging secularism, progressive human rights, liberation of oppressed peoples, and universal human dignity. Visit OFMI online at www.OFMI.org.