Bapu Surat Singh’s daughter Sarvinder Kaur addressed a press conference last evening (Feb. 27) at Chandigarh where she alleged that the Punjab police has been threatening them with dire consequences if her father continues with his hunger strike. 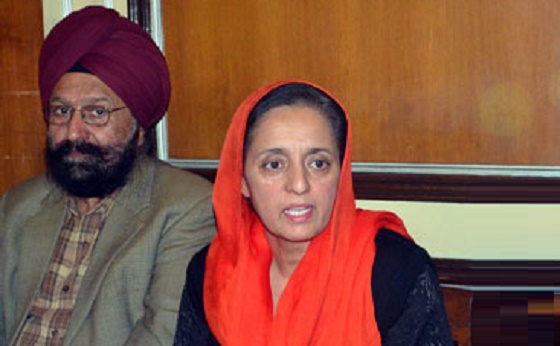 It is notable that the police started force-feeding of Bapu Surat Singh Khalsa from Thursday (Feb. 25). Bibi Sarvinder Kaur said that the police personnel present in the civil hospital of Ludhaina, where her father was kept under observation, had hardened their stance on Thursday morning. The police, she told during the press conference, turned the civil hospital into police cant and removed family members and supports of Bapu Surat Singh from the hospital.

“After removing us from the hospital, the police force-fed our father”, said Sarvinder Kaur. “Now the police has placed restrictions for meeting him and only I was allowed to meet him and that too for few hours only”, she added.

She said that her father has been forced to put unnecessary medical equipments and being fed forcibly which is very painful to him .

“My brother was arrested on Thursday along with other Sikh activists. Where as others were released by the police my brother was booked under 107/151 of Cr. PC and he was sent to Central Jail, Ludhiana”, she added.

She informed that her brother is also an NRI. “We have informed the US embassy about his detention”, she added.

She said she had come from Chicago. She described the treatment being meted out to her father by the police as inhuman.

Jasvir Singh Khandoor and Kummikar Singh said a Sikh delegation had appeased Punjab CM Parkash Singh Badal about demands of Bapu Surat Singh Khasla but the CM said he was “helpless” to get Sikh political prisoners released from jails.

It may be recalled that Bapu Surat Singh (82) is on continuous hunger strike since January 16. He is demanding release of Sikh political prisoners who have already completed minimum mandatory terms of their sentences. Earlier another Sikh activist Gurbaksh Singh Khalsa had twice started “fast unto death” seeking release of these prisoners, but he ended his fast at one pretext or the other.