Moga: The state farmers on Thursday opposed the Cabinet’s decision to install power meters on tubewells on the pretext of a pilot project, even as their five-day protest against the state government entered the penultimate day. 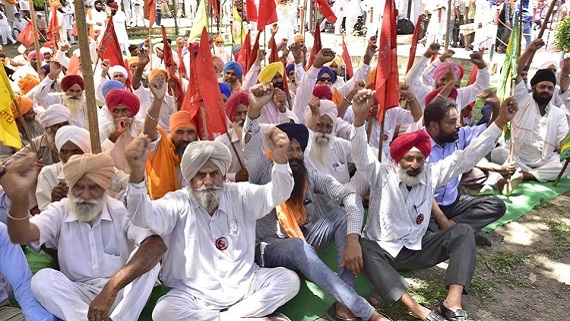 During his address to the protesting farmers BKU (Ekta) general secretary Sukhdev Singh Kokri feared that the government’s move was a step towards withdrawing power subsidy to the agricultural sector. “We will stage protests across the state against this decision,” he reportedly announced.

It is said that the farmers burned the effigy of Punjab CM Amarinder Singh government outside the mini-secretariat here.

In Amritsar, farmer leaders asked the government to withdraw power subsidy to influential landlords who possessed almost half of the 13.5 lakh agriculture tubewell connections in the state.

Jamhoori Kisan Sabha’s Rattan Singh Randhawa claimed that Finance Minister Manpreet Singh Badal and former Deputy CM Sukhbir Singh Badal were among those who were availing subsidy. He suspected that the new move would be applicable only for farmers with small landholdings, media reports said.

Whereas from Bathinda the media sources reported that the leaders of Bhartiya Kisan Union (BKU) leaders while hitting out at Congress lead state government for its ‘anti-farmer policies’, alleged that the Congress was now preparing the ground to withdraw the power subsidy given to farmers.

Furthermore, while addressing the protesters, union’s senior vice-president Jhanda Singh Jethuke and district chief Shangara Singh Mann alleged that the state government’s move to install electricity meters on tube-wells hints at its intention to withdraw the power subsidy being extended to the farming community of the state, The Tribune (TT) notes in its report.