Amritsar: Taking a jibe at SGPC backed Jathedar Gurbachan Singh for asking the dera supporters to return to Sikhi fold, the Dal Khalsa said first Gaini Gurbachan Singh should ensure his own ‘ghar vapsi’.  Pressing for his resignation, the organization stated that Gurbachan Singh should admit his mistakes, seek forgiveness from Khalsa Panth for undermining and ruining the traditions, norms and decorum of the supreme Sikh institution.

The present Jathedar has lost face and faith of the Sikhs, hence his appeal holds no water, said president H S Cheema in a statement released after the meeting of party’s office-bearers.

After Gurbachan Singh and his colleagues tactfully exonerated the self-styled godman in Sep 2015, the Panth unanimously rejected their faulty decision and gave the call for their boycott. Its’ really disgusting that the person who is facing boycott by the large section of the Sikhs was appealing to others for ghar vapsi, said H S Cheema. 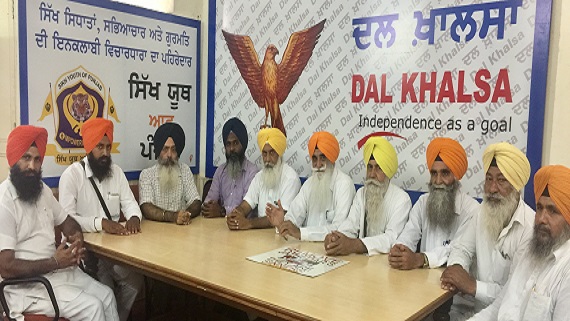 Furthermore, Bhai H S Cheema said during last elections, Dera supporter voted for candidates fielded by SAD led by Sukhbir Singh Badal. Instead of asking Dera supporters to join mainstream Sikhism, it would be better for Gaini Gurbachan Singh to appeal to them to join the Badal Dal. “This would serve dual purpose- Jathedar will once again prove his loyalty towards Sukhbir Badal and who in turn would ensure his continuity as Jathedar.

Taking a serious view of the situation, they said there’s no one in the SGPC and Takhats who could become source for inspiration for people who had gone astray to return to Sikhi fold. There’s a need for overhauling of the working of the SGPC, appointment of a person with vision and integrity at Shri Akal Takhat and re-addresal of the reasons for which people had gone astray.

Gaini Gurbachan Singh is a symbol of revulsion not attraction, he must leave the office, said Bhai H S Cheema.  The leaders said they would shortly meet the SGPC president to put across their concerns and viewpoint on the matter. “If the SGPC executive will not remove this discredited person, we would intensify our struggle to oust him”.

While asking the SGPC to replace Gurbachan Singh, we are in no way endorsing their unilateral and arbitrary practice to appoint the Jathedars. Contrary to the past practice, the next Jathedar must be appointed in consultation with Panthic institutions and groups and in a transparent manner. “We are strong votary of  fix procedural norms for appointment and removal of the Jathedars”.