Amritsar: The two days event organised under the title of “Panthic Assembly” concluded in Amritsar today. 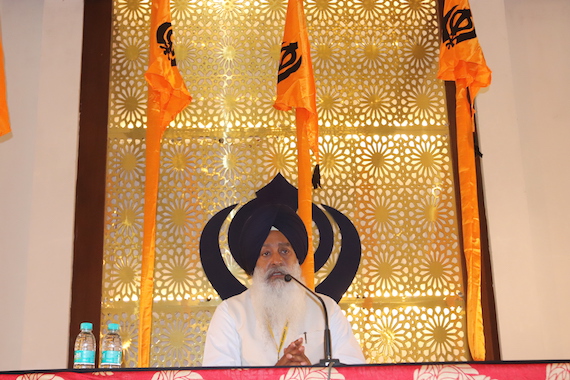 The event that took place on the lines of a ‘session’ of an assembly institution of parliamentary setup, was called by a committee comprising Advocate Jaswinder Singh, Advocate Navkiran Singh, Prof. Jagmohan Singh, S. Sukhdev Singh Bhaur and S. Kanwarpal Singh. The session was attended by representatives of various Sikh organizations, including people from various parts of the Indian subcontinent and USA and Dubai. 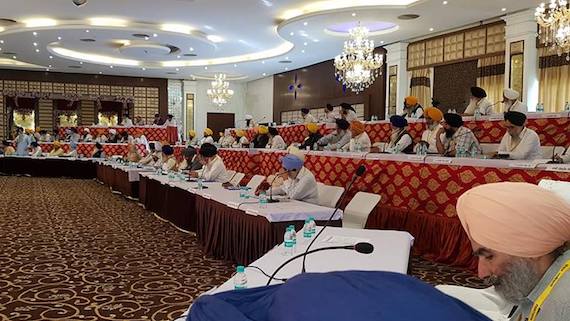 A view of the Panthic Assembly gathering on first day (October 20, 2018)

The organisers of the event have issued a release enlisting the resolutions passed during the assembly. The text of the release is being shared below, in verbatim, for the informations of readers of the Sikh Siyasat News:-

The Panthic Assembly expresses heart-felt condolences to the families of those killed in the heart-breaking tragedy that struck Amritsar when scores were killed on the railway tracks.

Appointment of Dummy Jathedar at Akal Takht Sahib by SGPC is not acceptable:

UNDERSTANDING THAT, the resignation of Jathedar Giani Gurbachan Singh is no way related to his failing health, but is due to the failing standards of the working of the august institution of Akal Takht Sahib under the present dispensation. He has quit the office as his guilt-consciousness has got the better of his greed to stick to office despite being rejected by nearly all sections of the community. He has stayed put under pressure of the highest echelons of the Shiromani Akali Dal –the political party that appointed him and which forced him from time to time to take decisions, which were clearly against the wishes and concerns of the Sikh people,

SIKHS TAKE PRIDE in the fact that the Akal Takht Sahib is a unique institution of a state within a state, the kind of which makes the Sikhs a unique religio-political nation,

THE PANTHIC ASSEMBLY rejects the appointment of Jathedar Akal Takht that will be carried out the SGPC without Panthic consultation and in the absence of norms for appointment, removal and framework of work for Takht jathedars.

IF the SGPC continues its undemocratic working of appointing the Jathedar only on the basis of the wishes of the leadership of the Shiromani Akali Dal, the incumbent will meet the same fate as of Giani Gurbachan Singh and will not be acceptable to the community, ab initio.

THIS PANTHIC ASSEMBLY urges the SGPC to install at the earliest the portraits of Bhai Krishan Bhagwan Singh and Bhai Gurjeet Singh –the martyrs of Behbal Kalan police firing in the gallery of martyrs at the Central Sikh Museum, Amritsar. AT the same time, the assembly asked the SGPC to remove the portrait of former Jathedar Mal Singh Ghuman as he was instrumental in pardoning the chief of the cultist dera chief.

DISTURBED over the pernicious and conspiratorial attempts by the Sauda Sirsa Dera chief Gurmeet Ram Rahim and his destructive cult, who has been hell-bent in teasing and taunting the Sikhs as a community,

CONSCIOUS of the fact that this centre of Gurmeet Ram Rahim could not have grown to such an extent and could not have built so much of clout without the express and subtle support and patronage of the Indian state and their political agents and agencies In Punjab and Haryana and they could not have dared to commit sacrilege and get away with it due to the blanked impunity granted to him and his followers,

RECORDING that the reports of the Justice Jora Singh Commission and Justice Ranjit Singh Commission and the People’s Commission of Justice Markandey Katju have clearly established that all mischief, blasphemous acts and sacrilege in Burj Jawahar Singh Wala, Bargari and more than a 100 other places in Punjab Haryana and Rajasthan, is the handiwork of the so-called Premis –the cultist followers of the Sauda Sirsa Dera,

NOTING that the Commission reports have also established that the Premis could not have acted on their own but were receiving directions from the Sauda Dera in Sirsa from its chief and his team of advisors,

TAKING INTO ACCOUNT that the earlier government of Shiromani Akali Dal Badal and the present Congress government have not gone into uncovering this conspiracy for their petty political needs of support from the Sauda Sirsa vote bank and have been hiding behind the facade of secularism in allowing the Dera to continue its nefarious activities in their Namcharcha Ghars and other forums,

A BAN must be imposed by the government of Punjab under the Unlawful Activities Prevention Act, on the Sauda Sirsa Dera, all the namcharcha ghars and other illegal institutions of the Dera, already under scrutiny of the Punjab and Haryana High Court, must be sealed and no trace of this anti-Sikh blasphemous Dera must be allowed to exist in Punjab and Haryana.

THOUGH the Sauda Dera chief Gurmeet Ram Rahim is imprisoned for his other sins, justice to the Sikhs will not be done, till he is tried in court and punished for the acts of blasphemy and sacrilege.

GENESIS OF THE CONFLICT and the ROLE OF THE INDIAN STATE:

BARGARI and BEHBAL KALAN are the culmination of the huge conspiracy to first hurt the Sikhs and then kill them when they stand up for the sanctity and respect of Guru Granth Sahib,

MINDFUL of the situation developing over the years and decades that the unique concept of Shabad Guru has not only been deliberately misunderstood but conscious efforts have been made to undermine this concept by propping up a personality cult from time to time,

DEEPLY HURT that such anti-Sikh deras or institutions continue their nefarious activities with full patronage of the Indian state and its agencies,

NOTING THAT the two major incidents of sacrilege, first in 1978 and now in 2015, happened in Punjab under the chief-ministership of the same Sikh leader Parkash Singh Badal, who only pays lip service to the Khalsa Panth but because of his association with the right-wing Bharatiya Janta Party has allowed anti-Sikh forces entry into Sikh institutions and paved the way for their malicious intervention in our religious and political affairs,

CORRELATING THAT whenever the Sikhs as a people have risen to protest the sacrilege of Guru Granth Sahib, from Amritsar in 1978, Chandokalan in Haryana in 1981, Nakodar in 1986 and now in October 2015, the rulers of the day –be it the Congress or the Shiromani Akali Dal, have always sided with the cultists and allowed them to have a field day by either killing the Sikhs directly or getting them killed at the hands of the notorious Punjab police,

REITERATING THAT there is no doubt whatsoever that these cults, deras have come into existence to dilute, demean and undermine the unique concept of Shabad Guru,

THE PANTHIC ASSEMBLY HEREBY exposes the fact that the Indian state by default allows the nefarious designs of sacrilege and blasphemy to happen and then reduces it to a law and order problem, allowing the police and other forces to kill innocent protestors as has happened in Kotkapura and Behbal Kalan.

PANTHIC ASSEMBLY ENDORSES BARGARI MORCHA AND ALL ITS DEMANDS

THE PANTHIC ASSEMBLY ENDORSES the Bargari Morcha and all its demands. The Sikh Sangat from all across the state of Punjab and outside has been making a beeline to Bargari to express solidarity with the genuine demands of justice for the victims of Kotkapura and Behbal Kalan firing and the sacrilege incidents of Burj Jawahar Singh Wala and others.

THE PANTHIC ASSEMBLY also endorses the demand of the Bargari Morcha that all Sikh political detenues, who have completed their prison terms, must be released at the earliest.

THE PANTHIC ASSEMBLY appeals to the people of Punjab –of all religions to continue their participation and presence at Bargari to mount pressure on the government of the day to deliver justice at the earliest.

On February 2, 1986, four Sikh youth were killed in a cold blooded murder spree by the police at Nakodar when they were protesting the sacrilege of Guru Granth Sahib. The government of the day had set up the Justice Gurnam Singh Commission, which had after a year submitted its report to the government, which is yet to be made public.

THE PANTHIC ASSEMBLY RESOLVES to urge the government to release the report of the Commission. The Panthic Assembly further resolved to set up a committee of lawyers to pursue this to its logical conclusion and provide a peaceful and justice-oriented closure to the ordeal to the families.

PANTHIC ASSEMBLY TO PUBLISH WHITE PAPER ON SACRILEGE IN PUNJAB

The Panthic Assembly declared the father-son duo of Parkash Singh Badal and Sukhbir Singh Badal as killers of Sikhs and traitors of the Khalsa Panth and appeals to the Sikhs to boycott them.

The Assembly also asked the government of India to respond positively to the Pakistan government proposal for the Kartarpur corridor. The Assembly thanks the State of Pennsylvania in the US for declaring the November 1984 killings of the Sikhs as the genocide of the Sikhs.