First World Kabaddi Cup and 2600 Free Medicine Shops to be named after Dr. Ambedkar in Punjab

The Punjab Deputy Chief Minister, Sukhbir Singh Badal yesterday said that Punjab was the only state which has implemented the ideology of Dr. Bhim Rao Ambedkar in true spirit.

Addressing the 4th seminar as part of 6 seminar series to commemorate the 125th birth anniversary of Dr. Bhim Rao Ambedkar at Dasmesh auditorium of Guru Nanak Dev University in Amritsar, the Deputy Chief Minister spoke on ‘Baba Saheb and Constitution’.

The Deputy Chief Minister also announced to christen the forthcoming World Kabaddi Cup in November as ‘Dr. Ambedkar World Kabaddi Cup’ besides declaring that the soon to be opened 2600 free medicine shops in the state would also be named after Dr. Ambedkar. 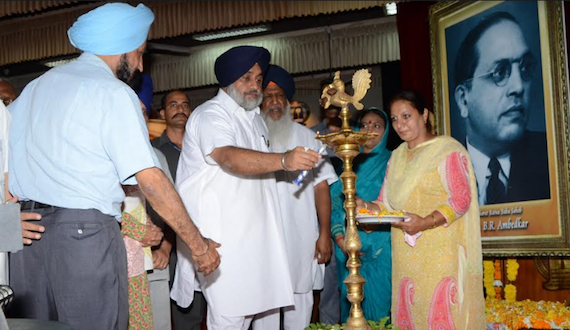 As per a government release, Sukhbir Badal also said that the subject pertaining to the life histories and philosophy of the great personalities would be made mandatory in all the universities of Punjab in order to enable the coming generations to adopt his lofty ideals for their personality development.

The Deputy Chief Minister maintained that Punjab carries forward the “proud legacy of secularism in accordance with which the people belonging to different castes, races and religions live peacefully with each other with equal respect for every religion which is amply clear from the non-occurrence of riots even in times of disturbance”.

He also disclosed that the Punjab government has constructed huge memorials for the sake of preserving culture and traditions of the state besides carrying out beautification projects such as Bhagwan Valmiki memorial at Ramtirath, Guru Ravidass memorial at Khuralgarh and beautification of Durgiana mandir.

He said that the SC/ST scholarship scheme which was just Rs. 13 crore has now been increased to Rs. 600 crore. Regarding the education scenario, he said that now the trend of Punjab’s students going to other states has been reversed and instead the students from other states are coming to Punjab for study purposes. He also said that with IIT Ropar, IIM Amritsar, AIIMS Bathinda and Indian School of Business, the state has carved out a niche in educational sector at the international level. He also informed that by the end of October all the development projects in the holy city Amritsar would be completed and the city would emerge as the global tourism hub. He exhorted the people to follow the ideas of Dr. Ambedkar and said that Punjab would be a role model in this aspect.

Addressing the gathering, Chief guest Lt. Governor of Puducherry Dr. Kiran Bedi said that following in the footsteps of Dr. Ambedkar can bring change in the region.

On the occasion, Punjab Vidhan Sabha Speaker Dr. Charanjit Singh Atwal said that the ideals of Dr. Ambedkar are relevant even today as they were 70 years ago. He said that Dr. Ambedkar was a great scholar, social reformer, politician, lawmaker, constitution builder, farsighted and a champion of human rights who thinking process included all the sections of society. He also said that the visionary approach of Dr. Ambedkar was not understood by the contemporaries and his advocacy in 1955 of dividing Madhya Pradesh and Bihar into 2 parts was finally turned into a reality after 50 years. Former Chief Justice of India K.G. Balakrishnan called Dr. Ambedkar as a multifaceted personality who did a great service by creating the constitution with democratic and equality as key aspects. On the occasion, MP Shwet Malik said that Dr. Ambedkar eradicated the menace of discrimination from the society by keeping equality as the key word from which the people should get inspiration.