Former IRA Leader And Northern Ireland Minister Passes Away At 66

Dublin: Former commander of the Irish Republican Army or better known as the IRA and fomer deputy first minister of Ireland  Martin McGuinness has died aged 66.

Sinn Fein a political outfit in the Ireland said in a statement: “It is with deep regret and sadness that we have learnt of the death of our friend and comrade Martin McGuinness who passed away in Derry during the night. 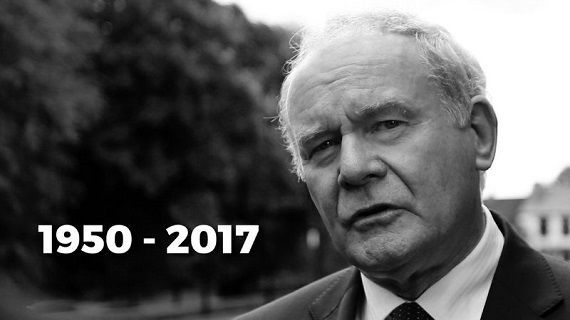 Mr McGuinness stood down in January in protest at the Democratic Unionst Party’s (DUP) handling of the ‘cash for ash’ energy scandal, triggering a snap election. His retirement came amid health concerns, but he, his family and colleagues did not specify the nature of his illness.

Sinn Fein president Gerry Adams paid tribute to his lifelong friend, saying: “Throughout his life Martin showed great determination, dignity and humility and it was no different during his short illness. “He was a passionate republican who worked tirelessly for peace and reconciliation and for the reunification of his country he adds.