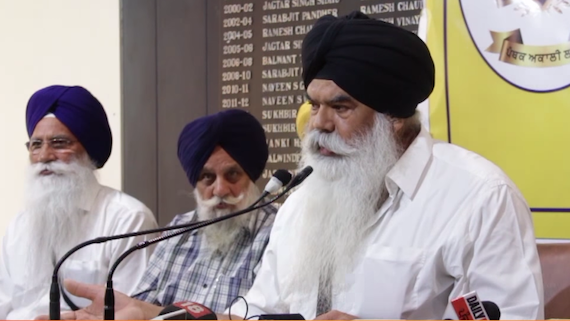 A written press release issued during the press conference reads as follows:

There is a glorious history of the Sikh Panth during the “Singh Sabha Lehar” and “Gurudwara Sudhar Lehar” which culminated in the formation of Shiromani Gurdwara Parbandhak Committee (SGPC) followed by Shiromani Akali Dal (SAD). The formation of which did a lot of good in the earlier times. But in the last 40 years or so the SGPC has not rempeined what it used to be. It is today marred with corruption and mismanagement with complete subservience to political masters.

History is witness that in the past all Religious and Socio-economic issues that had plagued the community were addressed before a “Sarbat Khalsa” and the Akal Takht Jathedar was held in the highest esteem. He was only committed to the Akal Purakh, which needs to be re-established. Jathedar of Sri Akal Takhat Sahib is the Chief Spokesperson of Panj Piare (Beloved ones of Guru).

Our Guru gave us the “Miri-Piri” Sidhant but today we are all witness to how the process has been reversed. Today’s SGPC has completely lost its relevance. The head of the Akal Takhat, The Jathedar who was selected by the “Sarbat Khalsa” today is merely a pawn in the hands of the Political masters, hence the chaos in our Panth’s Religio-Economic state.

The reasons behind its downfall is due to the self-centered leadership dominated by Parivar-vaad, which is responsible for the challenges that are being faced by Shiromani Akali Dal, SGPC and the Panth as a whole. For vote purposes they have no idea of the damage they have done the most disturbing being the separation of Ravi-dasiyas. Nirmalas and Udasi Sampardas, Dalits and other sects and communities from the Sikh Panth.

We are all aware the right-hand does not know what the left-hand is doing and vice versa. After long deliberations efforts have been initiated in the formation of the Panthic Akali Lehar, a platform to undo the wrong and assure that the right thinking people who have been greatly disappointed till today are elected. More importantly, help establish the Sovereignty of the Akal Takhat the highest seat of temporal authority, independent to Political interference.

At the social level there is chaos, Ritualism has made a comeback, social evils are all prevalent. The use of drugs, intoxicants is widespread. All kinds of superstitions have started dominating basic values and the fundamentals of Sikhism have been compromised. Erosion of basic values and staying away from basic fundamentals is responsible for many ills that are being faced by State as of now.

There is an economic crisis being faced by large part of the community. As the rural economy has taken a big hit, farmers and others belonging to marginalized sections of the society are committing suicide. The Youth is frustrated due to the unrest and economic insecurities, large number of youngsters immigrate to other countries every year to seek a better life. This is creating a different kind of problem at social levels. Punjab the most prosperous State whether it was Sport, Farming has completely been brought down to its knees.

Panthak Akali Lehar (Regd.) is not a political party, but is a platform with an appeal to all the Guru Nanak Nam Leva Sikhs around the world committed to the Panth and have the capacity to bring about a change and undo the wrongs that have been committed, to join irrespective of their political affiliations. We seek their blessings, advice and active participation for the Chardi Kala of the Panth along with Sarbat da Bhala.