Jalandhar, Punjab: Four Saroops of Guru Granth Sahib and more than hundred of Gutkas and Pothis of Gurbani were reportedly burnt during that broke out in a Gurudwara Sahib of village Suchi. The fire was caused by electric short circuit. 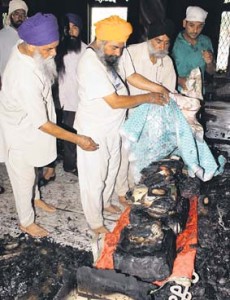 Information from reliable sources reveals that an AC was newly installed in the Sachkhand of Gurudwara Sahib, which caused the electric short circuit. Fire burnt the Sachkhand room and also engulfed the Gurbani Pothis kept in the adjacent hall. The fire couldn’t be controlled due to absence of Granthi and Sewadar in Gurudwara Sahib. Councillor Gurmeet Chand informed that the duty of Granthi Singh is in two shifts. After morning shift he went to his home.

Fire Brigade Officer Rajinder Sharma said that he sent two fire brigades on spot and they had to struggle hard to control the fire.

Jathedar of Sri Akal Takhat Sahib Giani Gurbachan Singh has expressed deep grief over this incident. He said that the inclination of such incidents is a matter of worry for us. He appealed the Administration to legally charge the responsible persons if the fire had originated because of their lack of supervision.