Washington DC, USA: The Friends of the American Sikh Congressional Caucus today thanked United States Federal Administration for organizing the Vaisakhi Celebrations at the White House. Harpreet Singh Sandhu from the body, which is extension arm of the American Sikh Congressional Caucus, a group of honourable Congress Members who are working tirelessly for the resolution of various Sikhs issues in US and outside, said the whole community was indebted to the US authorities.

Sandhu said that the Sikh diaspora was joyous over the organizing of the Vaisakhi Day Celebration 2016. The celebrations at the White House were held under tight security and the Sikhs from all over America and the authorities joined hands to celebrate together the birth anniversary of the Khalsa Panth with all pomp and show. “It is matter of pride for all of us that the US administration extended all help and support to the program’’, said Sandhu. 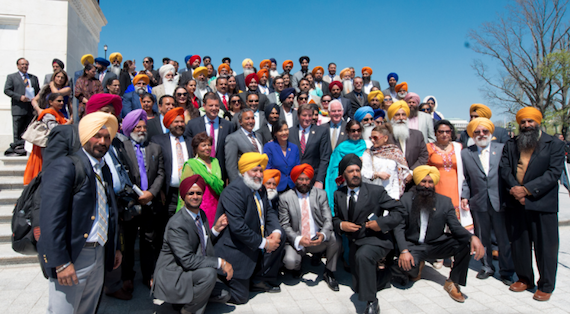 Later in the after noon at the steps of Capitol Building Both the Co-chairs and Vice Co-chairs of American Sikh Congressional Caucus joined the Sikhs to share the greetings.

Senior Cacucus member Mike Honda said, “I am honored to join the vibrant Sikh community in my Silicon Valley district and Sikhs around the globe in the celebration of Vaisakhi, which marks the birth of Khalsa. I am always proud to stand with our Sikh American community that continues to contribute to the rich tapestry of American society in standing for tolerance and understanding.”

American Gurdwara Parbandhak Committee (AGPC) President JS Hothi and Coordinator Dr. Pritpal Singh also thanked the Caucus and the whole US administration for showing regard to the important day for the Sikh community and expressed their gratitude.