Chandigarh: G20 member countries should ensure that human rights are at the forefront of the discussions at the G20 summit and urge India to put an end to the harassment of civil society and human rights defenders at once, Amnesty India said today.

“The G20 summit has to be more than a photo opportunity for member countries and they must pull their weight to address the increasing crackdown on civil society organisations and human rights defenders by the Government of India. They must urge Indian Prime Minister Narendra Modi to commit to ensuring that the space for civil society in India is protected,” said Aakar Patel of Amnesty India. 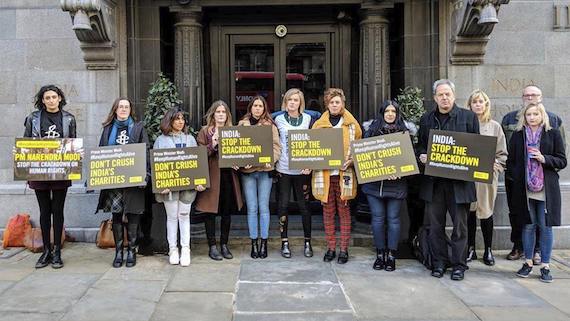 A view of protest in UK

For over a year now, India has witnessed an increasing pattern of demonizing and criminalizing organisations and individuals, who have raised their voices against human rights violations of the poorest and most marginalized communities in India. Amnesty India, which is part of the global Amnesty International movement, is the latest victim of the Indian government’s crackdown on civil society. On 25 October 2018, Amnesty India endured a ten-hour long raid by the Enforcement Directorate, a financial investigation agency under the Ministry of Finance. Following the raid, and despite operating in compliance with relevant national regulations, the accounts of Amnesty India were frozen, effectively stopping their work. There appears to be a concerted move by the Indian government to silence its critics and dissenters.

In response to this move by the Government of India, protests have sprung up in cities around the world on the first day of the G20 Summit. Earlier today, protestors in Berlin, London, and Kathmandu gathered in front of Indian Embassies in their cities to condemn the crackdown on civil society and human rights defenders in India, and called on Prime Minister Narendra Modi to ‘keep human rights alive’. On 23 November, a similar protest was also held in front of the Indian Embassy in Buenos Aires, Argentina. In response to the protests in Kathmandu, the Nepal police detained over thirty activists from Amnesty International Nepal in a shameful attempt to stifle protest. They were later released after being in detained for over two hours.

“G20 countries – which together constitute almost two-thirds of the global population, more than 80% of global GDP and three-quarters of worldwide trade have a shared responsibility to create a global development framework which has protection of human rights at its core. The recent crackdown by the Indian authorities–treating human rights organisations as criminal enterprises and human rights defenders as criminals—is inconsistent with its commitment to achieve fair and sustainable development,” said Aakar Patel.

Amnesty India believes that sustainable development can only be achieved in conditions of fairness, non-discrimination, transparency and accountability. Yet, Indian authorities continue to crush human rights work and clampdown on human rights defenders. As the G20 leaders gather at Buenos Aires, Argentina, to focus on issues impinging on global economic growth and sustainable development, Amnesty India urges heads of state to step up and address questions regarding their relevance in dealing with major challenges of the day.

“G20 leaders are uniquely placed to address the human rights risks and impacts faced by the people of member countries. They must recognise that effective, accountable and inclusive human rights organisations are at the core of achieving the Sustainable Development Goals,” Aakar Patel said.