Jalandhar: The Dal Khalsa today gave the call for Amritsar Bandh on June 6 to protest against the army assault on Darbar Sahib that resulted in killings of hundreds of innocent pilgrims and destruction of edifice of the Akal Takhat- the highest temporal seat and loot of invaluable manuscripts from Sikh reference library.

It was also decided that the organization will take out a Genocide Remembranc Parade on the streets of Amritsar on 3rd evening- the day assault was launched.

Both the decisions were taken during a meeting held under its working president Harpal Singh Cheema to chalk out the programmes to commemorate the 32th anniversary of Indian army attack on Darbar Sahib. The newly elected Dal Khalsa head said the pain of the deadly attack was fresh and the wounds of the attack still simmer. 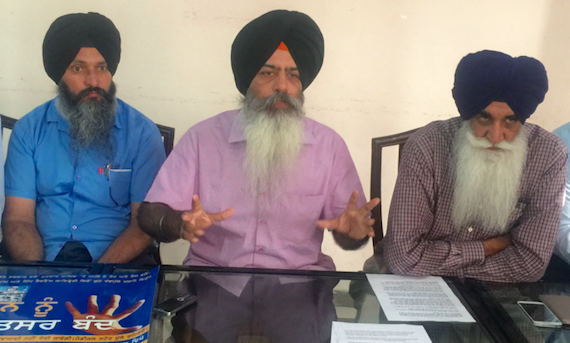 He said the young activists associated with the organization carrying saffron flags and placards would march on major lanes of holy city to remind the people of the third ghalughara, that changed the course of thousands of Sikh youth.

Stirring a hornet’s nest he said what Gen Dyer means to Indians, Gen K Brar means to Sikhs. Striking an emotional chord, he said thousands of innocent pilgrims, SGPC employees, political activists and volunteers were slaughtered by the forces during the attack. Appealing to the UN and the world powers to put Gen (retd) Brar and others who commanded the attack on trail for war crimes, he said many innocent pilgrims were shot and bombed after they were arrested and their hands tied.

Party activist Kanwar Pal Singh alleged that promoting anarchy and violence in Punjab is the insurance policy of the ruling circles of India to keep the Punjab problem unresolved and keep the Indian people divided and diverted. He made an appeal to Hindus, Muslims and Christians of Amritsar to participate in the bandh call and share the pain and agony of Sikhs. He clarified that medical stores will be exempted and there would be no disruption in rail and road traffic.