Hoshiarpur, Punjab: Dal Khalsa on Wednesday announced to organise Genocide Remembrance Parade in Amritsar on June 5 to mark the 35th anniversary of Ghallughara June 1984 – Indian army’s attack on Darbar Sahib and other Sikh Gurdwaras in Punjab and adjoining states.

Pro-freedom Sikh group has also given the call for Amritsar Bandh on June 6 to protest against the attack, demolition of Akal Takhat and denial of the successive Indian governments to return rare Sikh manuscripts and artifacts that army took along after putting the Sikh reference library on fire. 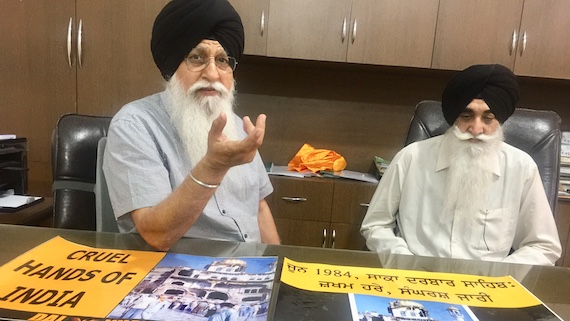 At a meeting of party executive held under president Harpal Singh Cheema, the members resolved to take out a march under the nomenclature of ‘Genocide Remembrance Parade’ on the streets of Amritsar to protest against India’s attack on Darbar Sahb and 37 other Gurdwaras, that resulted in killings of hundreds of innocent pilgrims beside paying homage to Sikh martyrs who displayed the spirit of true valour and warriors in defending the sanctity of Darbar Sahib.

Commenting on prediction of next government formation in Delhi, the Dal Khalsa meeting observed who-so-ever wins LS polls, they don’t expect resolution to Punjab issue’s. Whether Narendra Modi, Rahul Gandhi or Mamta becomes the face of India after May 23, the position of Sikhs will not change. “Our struggle for independence will continue till the people of this state are allowed to exercise their right to self determination under UN”.

Briefing the media after the meeting, party leader said the march would start from Gurdwara Ranjit Avenue and after passing through the major lanes of the city will conclude at the Akal Takhat-highest Sikh political authority- to perform prayer in memory of those who perished during the army assault. He said the pain of the attack was fresh and wounds simmering. He alleged that promoting anarchy and violence in Punjab was insurance policy of the Indian state to keep the people polarised on communal lines. He said after 35 years the Punjab problem is still a problem. He slammed the then government for finding military solution to political problem. The aim of the march and bandh is to send the message that the Sikhs have not forgotten and forgiven the perpetrators of the attack, said Tanda.