Amritsar, Punjab: In the remembrance of thousands of pilgrims and Sikh fighters who were martyred during the army attack on Darbar Sahib in June 1984, the Dal Khalsa has resolved to undertake a Genocide Remembrance Parade on June 5 and complete shutdown in the city of Amritsar on June 6.

While reiterating their demand for impartial international investigation into the killings of thousands of pilgrims, SGPC employees and volunteers of Dharam Yudh Morcha, the party spokesperson Kanwar Pal Singh said that the pain of the deadly attack was fresh and the wounds of the attack still simmer.

After presiding over the meeting of party members convened to chalk out protest programmes to observe Ghallughara week, he said forgetting assault on Sikh faith was not possible. He said that the great nations never forget the sacrifices of martyrs and they do everything to preserve their history for the future generations.

Giving a call for the Amritsar bandh on the completion of 30 years of army attack codenamed “operation Blue Star”, the Dal Khalsa leader said the call was meant to protest against the destruction of Akal Takhat, loot of precious hand written manuscripts and artifacts from Sikh Reference Library beside paying rich tributes to martyrs.

He said the march would be organized on 5th by its youth wing – the Sikh Youth of Punjab. He said young activists of SYP would start from party office and after covering almost all lanes and streets of the city; the march would culminate at Akal Takhat. 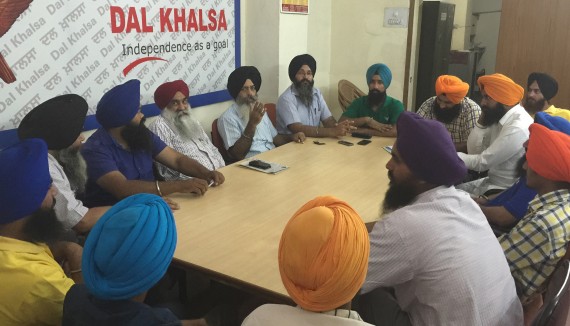 Taking a jibe at the statement of Chief Minister Parkash Singh Badal in which he assured to impress Modi government to return the invaluable manuscripts and artifacts taken from the Sikh reference library, Dal Khalsa leader said Akali Dal remained alliance partner in NDA govt under Atal Bihari Vajpayee and now again it’s part of present dispensation, however, apart from lip service it had failed the Sikhs on all fronts. Rather, Badals have always remained alert to obey the every order of the New Delhi and implement it without taking into consideration its negative effects on the people of the state. The status of Parkash Singh Badal is just of a facilitator for the BJP/RSS and he is credited for handing over the state into the hands of the Hindutva forces.