Amritsar: Dal Khalsa today launched a campaign to garner support for its Amritsar bandh call to mark the anniversary of Ghallughara June 1984.

Reiterating their call for Amritsar Bandh on June 6 to protest against Indian army attack on Darbar Sahib (Amritsar) and other Sikh Gurdwaras in Punjab and adjoining states 34 years ago, Dal Khalsa’s spokesperson Kanwarpal Singh, said in a statement here on Saturday that the attack was the logical culmination of a very long-standing policy of state interference in religious matters that was intended to hurt Sikh psyche. 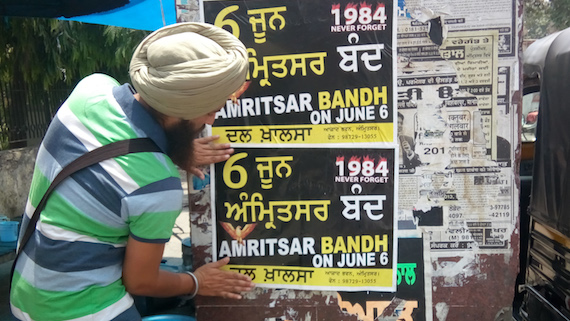 Today, youth groups associated with the Dal Khalsa distributed posters and leaflets across the city, urging traders, banks and educational bodies to keep their establishments closed.

Activists of ‘Sikh Youth of Punjab’, led by its chief Paramjit Singh Mand, also interacted with people in various markets and localities. 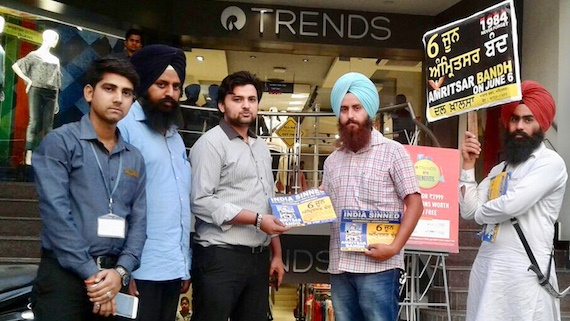 They pasted posters and banners on the walls of city urging the people to observe a peaceful bandh.

They clarified that the call was only for business and educational institutions and there would be no stoppage of transportation. The hardliner leader appealed to the non-Sikh population of Amritsar to share the pain of the community and express solidarity by closing their business premises. “It is time for the Hindu and Muslim community to show that they are with the Sikhs.”

The organization has also resolved to take out a ‘genocide remembrance parade in Amritsar on the eve of army attack on June 5. Addressing the media, Kanwarpal said the army attack was not sudden and unexpected as it had been revealed recently how the Indian government led by then Prime Minister Indira Gandhi took advise and other support from world powers including the United Kingdom. “All lies, pretence and disinformation spread by the leadership stand exposed,” he said.

Contesting Gaini Gurbachan’s Singh advise on how to observe the anniversary, he said the discredited Jathedar has no moral right to issue any sermons to the community. His sandesh has neither any relevance nor any meaning.