Tanda (Hoshiarpur): The shameful incidents of sacrilege of Guru Granth Sahib and continuation of “discredited and rejected” Takhat Jathedar’s on the august posts came in for a sharp criticism at a “Shabad Guru Satkar Samagam” organized by Sikh Youth of Punjab (SYP) to commemorate the 412th anniversary of first Parkash Purab of Guru Granth Sahib.

Speakers were of the opinion that disgraced Jathedar’s have no moral right to take any decision that relates to Guru Panth clearly denouncing the proposed meet called by Gaini Gurbachan Singh at Akal Takhat on Sep 6 to discuss the increased incidents of desecration of holy Granth. 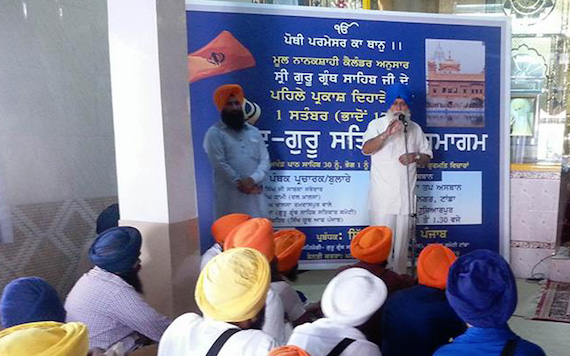 The organisers through a resolution appealed to the Sikhs to resolve their ideological differences in the light of Guru’s teachings and rededicate themselves to the concept of Shabad-Guru on this sacred day.

Speaking at a occasion, Dal Khalsa leader H S Dhami ridicules Gaini Gurbachan Singh for losing the faith and trust of the Sikh Panth ever since he pardoned the Sirsa Dera head in a dramatic and conspicuous manner throwing all norms and traditions to wind. 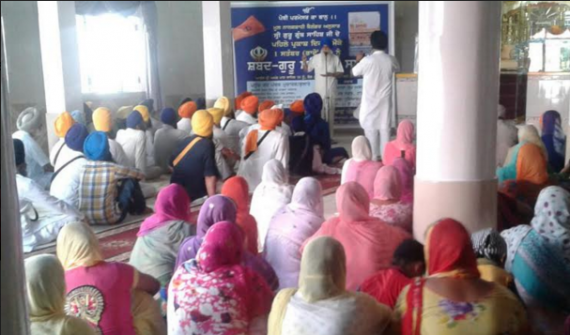 A view of gathering during the Samagam

Dhami said these Jathedars were holding the post without any moral and religious authority. He cautioned Sikhs from schismatic activities of all heretical cults and sects that lured and drift us away from Sikh principles and philosophy.

SYP- the youth wing of the Dal Khalsa organized today’s religious function as per original Nanakshahi calendar rejecting the SGPC owned amended version. The calendar crisis has divided the community vertically and Badals for their petty electoral gains were solely responsible for this division, said SYP president Paramjit Singh .

Another key speaker Gaini Kewal Singh former Takhat Jathedar and head of Talmel Sangathan was highly critical of the callous attitude of the state government towards Sikh sensibilities. “The government and its machinery has failed to unearth the conspiracy and arrest the miscreants behind the sacrilege incident of Barghari nor had it delivered justice to two Sikh demonstrators who were killed in police firing at Bebhal Kalan.