Amritsar: Giani Gurbachan Singh today kept a low profile at a Shaheedi Samagam held in the memory of Shaheed Satwant Singh and Shaheed Kehar Singh. The Shaheedi Samagam was held at Gurdwara Jhanda-Bunga Sahib near Akal Takhat Shaib within the Darbar Sahib complex. 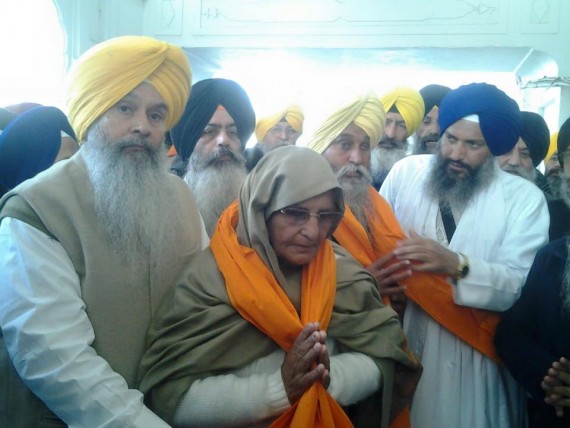 Mata Pyar Kaur honored at during the Shaheedi Samagam

The Tribune (TT) quotes Dal Khalsa spokesperson Kanwarpal Singh saying that it appeared that the SGPC had acquiesced to keep the Jathedar at an arm’s length.

It is notable that an annual Shaheedi Samagam marks the martyrdom day of Shaheed Satwant Singh and Kehar Singh at the Akal Takhat Sahib as they have been recognised as “national martyrs” of the Sikh nation. Duo had attained martyrdom after they were sentenced to death by Indian courts in relation to the execution of former Indian PM Indira Gandhi.