Washington (USA)/ Chandigarh: In a written statement sent to the Sikh Siyasat News (SSN), the Delhi Sikh Gurdwara Prabandhak Committee president Manjit Singh GK, who is summoned by a US Federal court in relation to a lawsuit, alleged that some persons working for Pakistan’s ISI were behind the lawsuit. Gk says that he is being targeted because she has been vocal against Pakistan government’s role and interference in Sikh religious affairs. 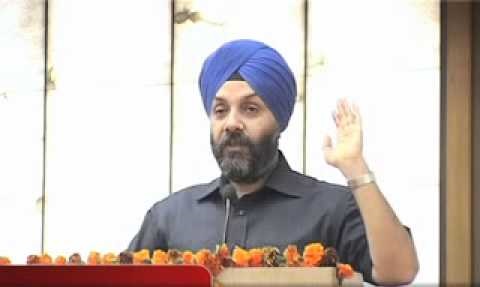 The Sikh Siyasat News has decided to reproduce the GK’s statement in verbatim for the information of our readers. In his statement GK also said alleged that there was an ongoing immigration scandal under the garb of asylum. He said that his party will expose the scandal.

Washington / 14-07-2015 Apprehending an on-going illegal extortion and immigration racket by portraying the beneficiaries as asylum seekers from India by some people in US who are exploiting Sikh sentiments for their vested interests, Delhi Sikh Gurdwara Management Committee (DSGMC) president Manjit Singh GK has urged the US government to conduct an inquiry into the nefarious acts of these people who were bringing shame to humanity as well as to the US government.

GK these days is leading a delegation of Shiromani Akali Dal to different cities of US. Without naming anyone he alleged that there were some people who were indulged in an extortion racket by misusing the US laws and arranging political asylum to people from India who otherwise were denied visa by the US embassy in India. GK hinted of revealing the names of people behind the racket at an appropriate time.

“I came to know about the people here who were misusing US laws and issuing threats to other people but finally settling the issues in exchange of crores of rupees” he said adding that he wouldn’t let anyone be victim of any such design. We will discuss the issue with our party leaders upon returning to India and expose these people” said GK. A delegation led by GK is meeting deputy minister of state Tony Blinken with a complaint for an action against the unscrupulous elements. The delegation is also expected to meet US secretary of state John Kerry to flag all the issues concerning Sikhs.

Meanwhile GK himself has been summoned by a US Federal court on 10 July, 2015 on the complaint of two persons alleging that they were harassed at the behest of GK and some people have approached DSGMC general secretary Manjinder Singh Sirsa to “settle” the case sitting across the table and demanding huge money in exchange. “I was approached by people who said they would settle the case against DSGMC president issue on table, by exchanging money,” said Manjinder Singh Sirsa.

Sirsa said that there were certain people in US who were allegedly involved in exploiting Sikh sentiments by fanning various Sikh religious issues and 1984 anti Sikh riots, to fill their coffers.

“The initial inquiry held by DSGMC has revealed that there were few people sponsored by Pakistan’s ISI who had unleashed a campaign against India and now they have turned their guns towards me since I had not only been opposing but also vocal against Pakistan government’s role and interference in Sikh religious affairs,” said GK.

“Certain people living in foreign countries make big issue in the name of releasing Sikhs from Indian jails but have they ever tried to get the Sikhs released from the jails of US, Canada, Italy, Dubai and other foreign countries,” questioned GK.

Meanwhile Manjinder Singh Sirsa speaking on the reports of criminal complaint filed against him in New York have denied of any such charges. “Some people were making concocted stories to malign me and my party’s image, which would fall flat,” he said. The complaint as per reports has been rejected by Richmond Hill area police.