Barcelona, Spain: Global Sikh Council has expressed shock at the latest in a wave of deliberate vehicle rammings across Europe. GSC issued a statement condemning the recent incident in which a driver drove his van into crowds on Barcelona’s most popular street at least killing 13 innocent people and injuring over 100.

GSC praised the Sikh community of Spain for offering support to the authorities to help the families of the dead and wounded. 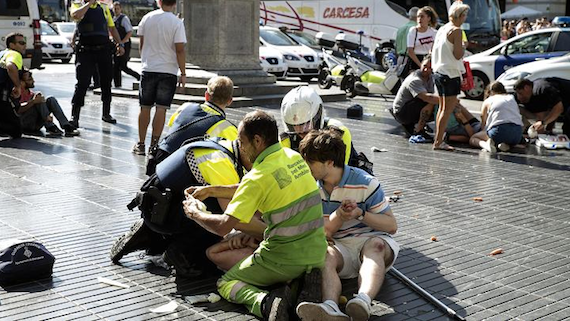 A view after Horrific Attack in Barcelona in Spain

Mr Labh Singh of Spain explained that, in the spirit of Sarbat the Bhalla (looking to the wellbeing of all), the Sikhs of Spain were at the forefront to offer support against this heinous attack on innocent people going about their business’.

“GSC is deeply saddened by the attack and all our thoughts are with the victims, their families and with the people of Spain on this senseless loss of life. GSC conveys their condolences to the families of the dead and wishes speedy recovery to the wounded in this barbaric attack. GSC also commends the public authorities for their efficient way of stopping any further carnage and arresting those responsible. We also express our sympathy to the Spanish Sikhs at the sad occasion and request them to be vigilant against any mistaken identity hate crime”, reads the statement issued by GSC.