Jalandhar, Punjab: Joining issue with Home Minister Rajnath Singh, who urged the Punjab’s youth to shun drugs, the Sikh Youth of Punjab (SYP) asked him to take pain and find out as to why and who allowed this problem to become monster that’s ruining the lives of young generation.

Upset over the future of the youth of this border state, the SYP slammed  successive governments at centre and state level for failing to check the drug menace and instead allowing the problem to assume monsters proportion.

Briefing the media, the head of youth group Paramjit Singh said drug peddlers were enjoying their trade and the masses were in a state of helplessness.  He said the hold and penetration of drug suppliers has reached the portals of power and the highest levels of administration.

“It was this reason why despite all efforts to check the menace, the problem has shown no sign of ebbing”. 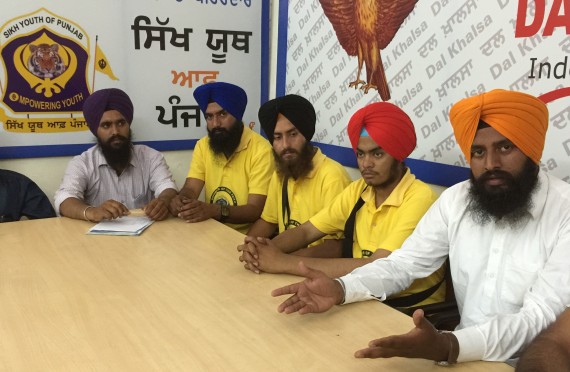 “I believe at one level, it’s a part of the design to engage the Punjabi youth in drugs as a weapon to check their political consciousness and to counter the fighting spirit in them”, feels Paramjit.

The successive govt’s through its agencies in one way or other, were responsible for injecting this slow poison in the veins of Punjab’s youth”.

He said the three bigwigs- Rahul, Ramdev and Rajnath have raised the drug problem issue at different occasions during their high profile visits to Punjab only to embarrass the people of this state.

Ironically, apart from lip service none had any vision, programme and mechanism to save the lives of Punjab’s youth from further ruining.

“They came to Punjab, played with gallery and went back, that’s all”.

He said even lay man knows that majority of youth is addicted but none political party had cared and dared to catch this bull by its horns.

He said we all were aware that without police-politician-smuggler nexus this trade can’t flourish. Then what’s stopping the union as well as state government in containing the menace, he wondered.