Granthi who forgot to report on duty in Darbar Sahib resigns

Amritsar, Punjab: Giani Jaswinder Singh, who was demoted to the post of Grathi from the Head Granthi of Sri Darbar Sahib about half and a year ago, has now resigned from the post of Granthi. 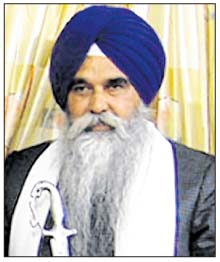 Giani Jaswinder Singh’s resignation came a recent incident in which he failed to report on duty in the morning which resulted in delay in taking the ‘Palki Sahib’ to Darbar Sahib.

The duty was then performed by a granthi of the Akal Takht. The incident was strongly condemned by the Sikh Sangat, following which the executive committee took the decision regarding his resignation.

Earlier, Giani Jaswinder Singh was the Head Granthi of the Darbar Sahib but he was demoted to the post of Gandhi after he forgot certain Shabad from Rehras Sahib.