Washington, USA: The Pakistan Government officials have reportedly endorsed a plan to explore green projects at Kartarpur and Nankana Sahib, the most sacred Sikh shrines in Pakistan. This will be part of the celebration of 550th Parkash Gurpurb of Guru Nanak, Founder of Sikhism, in 2019 as suggested by EcoSikh, a Washington based Sikh organization. Guru Nanak was born in Nankana Sahib and he lived in Kartarpur during his last 17 years.

EcoSikh’s President, Dr. Rajwant Singh, visited Nankana Sahib and Kartarpur Sahib, Nairowal, with the purpose of exploring what actions would be needed, by the communities and the administrations, to preserve the ecology of these sacred sites. He was invited by the first Sikh member of Punjab Assembly, Ramesh Singh Arora and who facilitated all the official meetings. 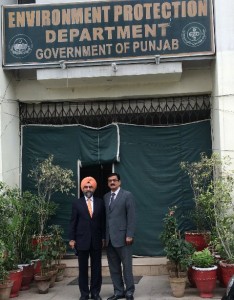 Dr. Singh proposed that the 550th anniversary of Guru Nanak be celebrated in a unique manner and in meetings with the Federal Minister of Planning Development and Reform, Ahsan Iqbal of Narowal, he discussed the possibilities of far-reaching environmental plans. Ahsan Iqbal gave a positive response of forming a steering committee to formulate master plans.

“These sacred sites are revered by Sikhs all over the world. We have proposed the idea of dedicating between 25 and 50 acres of land at Nankana Sahib and at Kartarpur as “sacred forest” in order to conserve the bio-diversity and sanctity around this sacred place for generations to come,” Dr. Singh said.

Plans include solar panels, creating organic farmland for langar, dedicating sacred forest areas, and creating an ethos of care for the environment among local faith leaders, local communities, and thousands of pilgrims who visit the holy destinations of Nankana Sahib and Kartarpur every year. In addition around five or 10 acres would be devoted to organic farming to supply organic food for langar at the Nankana Sahib gurdwara and Kartarpur Gurdwara.

“We have also asked the environment ministry to share an environment assessment plan of the two areas to create a master sustainability projects. This would also promote eco-tourism in addition to more formal pilgrimage which will be helpful for the local economy. All the officials have agreed that any development of these sites will have an eco-focus,” he added.

Evacuee Trust Property Board’s (Auqaaf) Secretary Khalid Ali also expressed his support to bring development under a green master plan. Solar energy plans were also part of the discussion for Nankana Sahib. Nankana Sahib has thousands of acres of land associated with the shrine and is managed by the trust.

Officials have asked EcoSikh to send initial proposals upon which a master plan will be drawn to have a high level approval to start the work soon, as the anniversary of Guru Nanak is approaching in 4 years.

Dr. Singh also met Commissioner of Lahore Abdullah Sumbal who oversees Nankana Sahib and has a reputation of a no nonsense work ethic. He immediately consented to create a proposal for the region to be taken up by the higher authorities. Dr. Singh also discussed various issues with Director General of Environmental Protection Agency of Punjab, Shaikh Farooq. Mr. Farooq promised that his office will prepare an environmental assessment plan around Nankana Sahib and will propose remedies to curb pollution, lowering of the water table and deforestation including assessing the sanitation, sewerage and solid waste plans.

Ramesh Singh Arora said, “The aim of all sides is for these celebrations in Pakistan to be as appropriate, and wonderful, as possible and for them to have positive repercussions down the generations in Punjab and elsewhere.”

He added, “We hope that Sikh diaspora will invest in the infra-structure development here and will make this a favorite destination for spiritual renewal and for cultural connection.”

“Kartarpur, as a place where the Guru was a dedicated farmer during the last 17 years of his life, is particularly relevant to all Sikhs. It connects us with the spirit of Guru Nanak and teaches us to hold earth as a sacred gift from the Creator. These is no better way to pay tribute to Guru Nanak than keeping the land and the surroundings vibrant with nature,” he said.

He further stated that EcoSikh would commit to appoint special personnel who will be focused on this project.

EcoSikh’s South Asia Project Manager, Ravneet Singh said, “EcoSikh has dedicated its next five years to being true to Guru Nanak and his teachings about the faithful use of land and water. We will make all possible efforts to connect as many political, social and religious dots as possible to make the prime Sikh pilgrimage sites in Pakistan truer to the Guru’s teaching about protecting and respecting and loving the land.”