Gurdaspur: At least three persons were killed when armed gunmen strike in Dinanagar, Gurdaspur. As per initial reports a police station also came under attack from gunmen in Army uniforms. As per media reports four armed person entered the premises after initially firing at a bus, injuring six passengers this morning. Four police personnel were also injured in the attack.

According to The Tribune: “State police mounted a counter operation to neutralise the assailants, and an intermittent exchange of fire is currently on”.

“Punjab police’s SWAT and Army teams had also arrived at the scene, while an NSG team was on the way”, The Tribune notes. 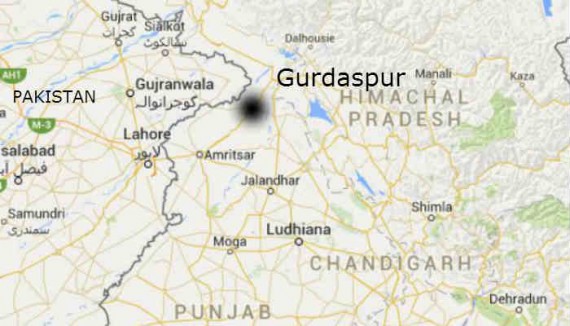 As per information, besides Gurdaspur, reinforcements from neighbouring police districts of Batala and Pathankot have also reached Dinanagar. The police chiefs of all three districts were also on the spot, directing the operation.

Five explosive devices were found on the Pathankot-Amritsar railway track near Gurdaspur.

According to a Focus News report, the attackers came in a hijacked Maruti car and opened fire at the bus. The state roadways bus was going to Jammu and Kashmir. After that, the gunmen attacked the police station, killing a policeman on guard duty.

At the police station, the Dinanagar SHO and three other policemen were injured. They were shifted to Gurdaspur Civil Hospital, where entry was restricted by the police.

The Gurdaspur SSP has requisitioned more reinforcements. The Deputy Commissioner of Gurdaspur has also called in the Army.