Gurdaspur/Chandigarh: Parents of Bhai Jaspal Singh Gurdaspur, a 17 years old Sikh student who was killed by the Punjab police in Gurdaspur firing incident six years ago, have urged Captain Amarinder Singh to ensure justice for their son. S. Gurcharanjit Singh, a retired armyman, released a video message over social media calling upon the Punjab CM to set-up proper investigation team to get the 29 March 2012 Gurdaspur police firing incident probed impartially.

“As the Punjab government has tabled the Behbal Kalan probe report in the state assembly we want the government to ensure justice in our case also”, said S. Gurcharanjit Singh. 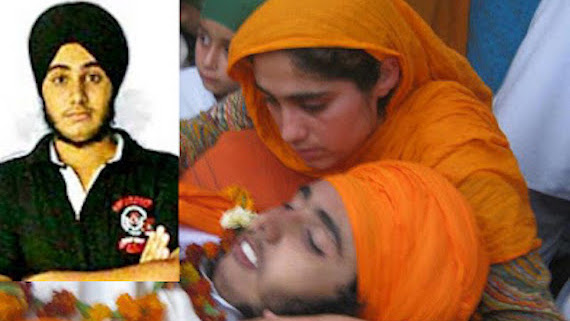 [Inset: Jaspal Singh, who was killed in police firing at Gurdaspur on March 29, 2018]

He said that their family had lost the hope for justice but the change of government in the state followed by tabling of Justice Ranjit Singh Commission’s report have revived their hope.

He said that Jaspal Singh, their only son, was killed in cold blood by the Punjab police and even the culprit was also identified still no action was taken against anybody by previous government.

After an Indian court had issued black warrants of Sikh political prisoner Bhai Balwant Singh Rajoana ordering his hanging in Central Jail Patiala on March 31, 2012 there was widespread demonstrations by the Sikhs against the proposed hanging.

Senior police and civil officers were present on the spot. Sikh sangat was chanting Satnam Waheguru while sitting on the roadside, in front of Gurdwara Sahib Ramgarhia.

The police suddenly opened fire and started lathicharging the Sikh demonstrators and chased them in streets. Two Sikh youth were injured in this firing- one of them Jaspal Singh of Chaur Sidhwan village succumbed to his injuries while other, Ranjeet Singh, survived.

The then state government led by SAD (Badal)-BJP set up an inquiry under the charge of Commissioner, Jalandhar Division, S. R. Ladhar. The inquiry raised serious questions about use of AK47 and SLR guns by the police against the demonstrators who were bare handed but even this inquiry failed to fix the responsibility of constable who had fired on Bhai Jaspal Singh Gurdaspur or the senior police and civil officers who had ordered the firing.

The Punjab police deliberately mishandled the probe and even tried to mislead the Punjab and Haryana High Court. It was on high court’s intervention the bullet recovered from the body of Jaspal Singh was sent to CFSL and it matched with an AK47 gun that was allotted to a constable named Vijay Kumar on that day. It became clear that constable Vijay Kumar had killed Jaspal Singh Gurdaspur.

Instead of filing charge against constable Vijay Kumar and holding investigation the culpability of civil and police officials who had ordered unwarranted police firing, the police filed closure report in the court.

The family’s petition seeking CBI inquiry into the matter was turned down by the Punjab and Haryana High Court.

The police has twice field cancellation report in the lower court. For past three to four years, the family did not get any update from the lower court on this case.