Chandigarh: Various Sikh thinkers and scholars observed that the Sikh Gurdwara Act, enacted nearly 100 years ago by the British to manage the affairs of Sikh shrines has lost its relevance as it has been reduced to an arrangement for electing a house for the Shiromani Gurdwara Parbandhak Committee (SGPC) on the political pattern of a state assembly relegating distinct Sikh religious requirements to the background.

Participating in a seminar organised here on Sunday (Oct. 15) by the Kendri Sri Guru Singh Sabha, a representative body of gurdwara management committees across India, they said “political parties have directly been entering into the SGPC elections bringing money, muscle power and other inducements into play as they do while running for assembly/ parliamentary polls. This process, invariably, throws up pure politicians and their lackeys as SGPC members, thereby keeping devout and selfless religious personalities out of the house”. 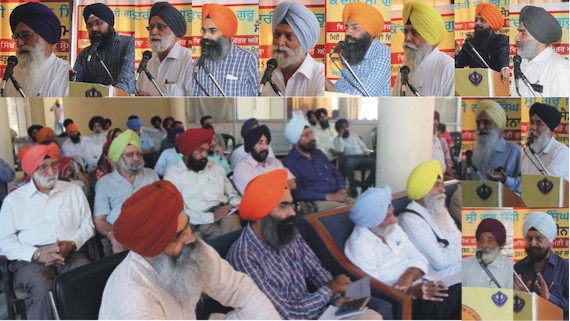 The gathering opined that past experience showed that the SGPC polls suppressed the Sikh tradition of selfless and volunteer service as the political parties and budding politicians had been taking the entry into the SGPC house as a stepping- stone to the power politics. That is why , for past several decades politicians like Sucha Singh Langah and his ilk have been dominating the SGPC house, bringing corrupt and immoral practices into the religious affairs.

The British devised the Gurdwara Act, a replica of Municipal Act as an instrument to control the Sikh religious affairs in 1925. The same statute has been kept intact and alive by the New Delhi establishment– which is subservient to the Hindu majority–even after independence, with clear intention of controlling and manipulating the religious affairs of the tiny Sikh minority, the Sikh thinkers added.

The bitterly critical Sikh scholars said the past experience had shown that the Central Government held elections to the SGPC only when it was sure about the victory of nationalists and collaborationist Sikhs who were out to compromise the Sikh traditions and tenets.
It has also been proved that the SGPC had failed to serve as a custodian of the minority Sikh religion and culture as it had allowed the Akal Takht, the supreme temporal authority among the Sikhs , to succumb to the political pressures by New Delhi and the electoral considerations of the Akali Dal, dominating the SGPC.
The gathering adopted a resolution urging the Sikhs that they should vote for devout religious Sikhs in future SGPC polls and boycott candidate fielded by political parties.

The gathering authorised the Kendri Sri Guru Singh Sabha to form a group of Sikh intellectuals to identify independent, devout Sikhs for contesting the SGPC elections and work for drastic upgrading of the Gurdwara Act to change the mode of election to SGPC.